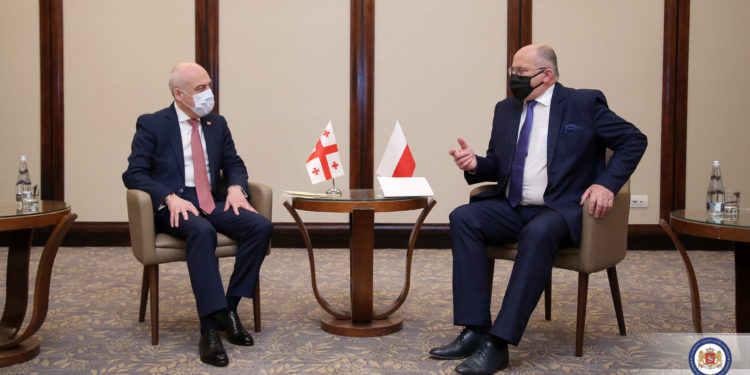 Vice Prime Minister of Georgia Davit Zalkaliani met with his Polish counterpart, Zbigniew Rau. they talked about the successful Georgian-Polish cooperation and Poland’s active support in the international arena on important issues for Georgia, such as European and Euro-Atlantic aspirations, as well as the occupation of the country’s territories and regional security.

The importance of Poland’s support for both Georgia and Ukraine at the forthcoming NATO Summit in the context of “open door” policy was stressed during the meeting.

The Minister also reviewed the security environment in the region, stressed the importance of peace in the South Caucasus for the stable development of the region, spoke about the situation in the occupied territories of Georgia, the ongoing processes in Ukraine.

Foreign Minister Zalkaliani briefed his Polish counterpart on the ongoing political process in Georgia and the signing of the agreement. For his part, the Polish Foreign Minister expressed satisfaction with the signing of the agreement by the ruling team and a number of representatives of the opposition, which reaffirmed the irreversibility of Georgia’s democratic development. On behalf of Poland, Rau reiterated his support for Georgia as a great friend of Poland and a key partner in the region.