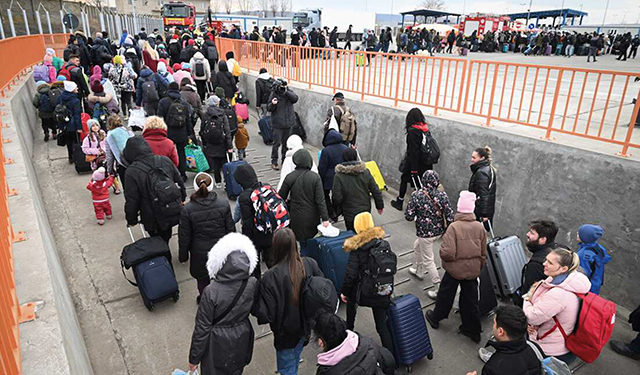 In the 6th week of Russia’s invasion of Ukraine, the Russian troops are leaving scenes of devastation behind them – destroyed apartment buildings, mass graves and bodies lying in the streets – as they leave the area around Kyiv and pull back and focus on gaining full control of the Donetsk and Luhansk regions in the east, which are already largely controlled by Russia.

The above move points to the failure of Moscow’s initial plans to take Kyiv and thus gain an advantage in the war by occupying the capital.

As Russian troops retreat from northern Ukraine and focus operations in the country’s east and south, the Kremlin is struggling to scrape together enough combat-ready reinforcements to conduct a new phase of the war, say American and other Western military and intelligence officials.

Moscow initially sent 75% of its main ground combat forces into the war in February, Pentagon officials said. But much of that army of more than 150,000 troops is now a spent force, after suffering logistics problems, flagging morale and devastating casualties inflicted by stiffer-than-expected Ukrainian resistance, military and intelligence officials say.

There are relatively few fresh Russian troops to fill the breach. Russia has withdrawn the forces, as many as 40,000 soldiers, it had arrayed around Kyiv and Chernihiv, two cities in the north, to rearm and resupply in Russia and neighboring Belarus before most likely repositioning them in eastern Ukraine in the next few weeks, US officials say.

The speculation comes as thousands desperately try to flee Ukraine’s eastern Donbas region as Russia intensifies its strikes there. The Luhansk regional governor has urged civilians to “evacuate while it is safe,” predicting a larger Russian assault to come.

Millions are displaced, either finding refuge in Western countries, like Poland, Slovakia, Hungary, Romania and Moldova, or in shelters in cities where the situation is less dire, like Lviv.

The UN says the war has created more than 4.2 million Ukrainian refugees, mostly made up of the elderly, women and children.

Bucha & the Russian War Crimes
The whole world was shocked and saddened by the scenes that met them in Bucha, a town near Kyiv, as the images of dozens of brutally killed Ukrainians left in the streets were spread by Ukrainian forces who liberated the town. Reportedly, up to 300 civilian bodies were found on streets and in mass graves.

On Sunday, Ukraine accused the Russian forces of carrying out a massacre in Bucha, while Western nations reacted to images of dead locals with their hands tied behind their backs, by imposing new sanctions against Moscow and Putin’s family members.

Russia’s defense ministry denied the Ukrainian allegations, saying the footage and photographs showing bodies in Bucha were “yet another provocation” and “staged” by the Ukrainian government.

Ukrainian President Volodymyr Zelensky called for a Nuremberg-style tribunal to investigate and prosecute Russian war crimes. The US House voted overwhelmingly Wednesday night to call for an investigation of war crimes committed during Russia’s invasion of Ukraine.

Mariupol & the Growing Humanitarian Crisis
Meanwhile, fighting and Russian airstrikes continue in the besieged eastern city of Mariupol, where aid agencies say the humanitarian crisis is worsening as some 160,000 residents have no access to water, power, heating or communication.

Some residents in the besieged city have died due to stress and hunger, and often it is not even possible to bury them. Instead, they are left in the buildings or the streets. As, despite several suggestions from Russia, which considers the occupation of the city vital due to its strategic location, Mariupol does not seem ready to surrender, and no-one can project how long these people will have to stay in such unbearable conditions for, “The city of heroic resistance” is how Mariupol has been named.

The humanitarian situation as a whole is dire. Up to 160 children are among the 1,563 civilians killed in Ukraine since Russia invaded its neighbor on February 24. The Office of the UN High Commissioner for Human Rights adds that the real death toll in Ukraine is likely much higher, citing delayed reporting due to the armed conflict. Russian forces have shot and kill children and women without mercy, while dozens of women and minors are reported to have been raped and tortured.

As more and more devastating scenes evolve on the ground, the West is trying to increase its assistance, both militarily and economically.

“With the Biden administration sending dozens of armed drones to Ukraine, the Pentagon is training Ukrainian soldiers in the United States to use the weapons to attack Russian tanks and other armored vehicles,” reports the NY Times.

“Russia still has forces available to outnumber Ukraine’s, and Russia is now concentrating its military power on fewer lines of attack, but this does not mean that Russia will succeed in the east,” Jake Sullivan, President Biden’s national security adviser, said on Monday.

“The next stage of this conflict may very well be protracted,” Mr. Sullivan said. He added that Russia would probably send “tens of thousands of soldiers to the front line in Ukraine’s east,” and continue to rain rockets, missiles and mortars on Kyiv, Odesa, Kharkiv, Lviv and other cities.