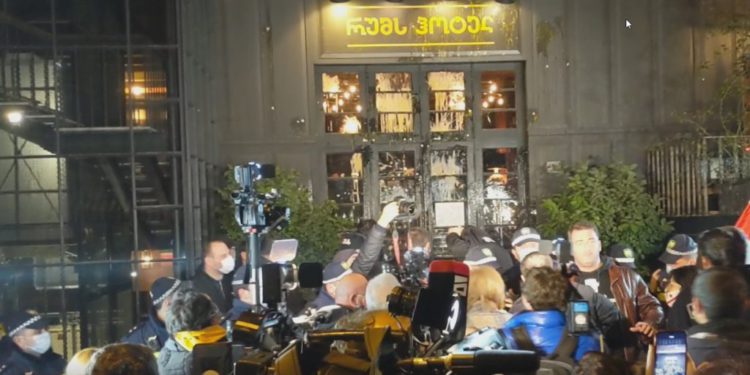 “The government allowed him, the people made him go,” Elene Khoshtaria, the leader of the ‘Droa’ party, posted on Facebook about the visit of Russian journalist Vladimir Pozner.

“Pozner’s arrival in Georgia is an insult to our state. The state has specific leverage not to allow him into the country because of his statements; statements that are directed against the territorial integrity of our country,” she added.

Pozner arrived in Georgia on March 31 to celebrate his birthday, a move which was followed by protests. He left the country earlier than planned on the morning of April 1st.

Vakho Sanaia, a journalist from TV Formula, responded to Pozner’s arrival by posting on Facebook that he is not in favor of someone at the border being asked about their political views, and he had not met a Georgian who hates a Russian just for being Russian.

Sanaia posted that Pozner is not an ordinary tourist: he is a well-known journalist and influencer. “In fact, Pozner is Putin’s most dangerous propagandist, and that’s why he works where he works. That’s why Pozner’s word matters. He is a representative of the Kremlin. Therefore, when he says that Abkhazia will never be Georgia, and Russia is right with Georgia, Pozner will never be a welcome guest. Therefore, his visit is insulting,” he wrote on Facebook.

The Prime Minister of Georgia, Irakli Garibashvili, responded to Pozner’s visit. “Vladimir Pozner, who is also a US citizen, did not violated the law on occupation. He frequently visits Georgia with a US passport. , He and his entourage had a ‘Covid-passport’ and also a negative PCR test. They entered the country in accordance with the law.

“As for the gathering of guests in hotel-restaurant Vinotel in Tbilisi without considering the regulations, this is, of course, unacceptable for us, for everyone, and the relevant agencies responded immediately, fining, both the hotel and each individual involved,” Garibashvili said.