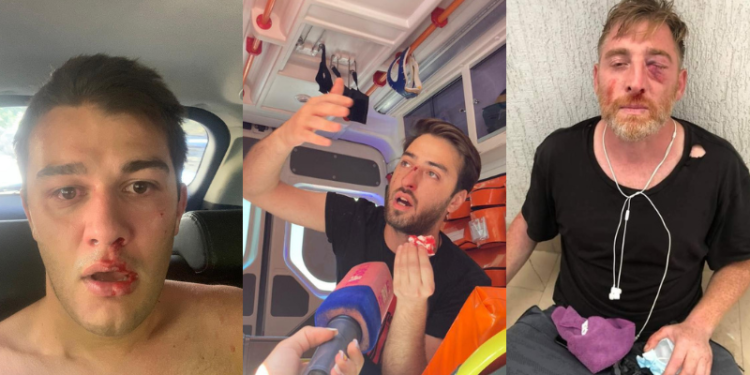 As a result of the assaults by the opponents of Tbilisi Pride, 47 media representatives have been injured so far, Media Checker reports.

Based on the information available at this stage, representatives of 16 media outlets were injured today as a result of aggression and violence from the homophobic groups.

Employees of amost all big media outlets, especially of those publicly supporting the minorities, are among the injured.

The Ministry of Internal Affairs, the employees of which couldn’t properly defend ordinary citizens and media representatives from the violence, has released a statement regarding the illegal actions exposed by the agency on July 5 and the response measures held by police. The statement reads that despite mass violence against the media and attacks on the offices of Shame Movement and Tbilisi Pride, only 8 people have been administratively detained so far, while an investigation is underway.

“Investigative and procedural measures are in progress on the following exposed violations: On the facts of violence exercised against media representatives on Rustaveli Avenue and illegal interference in their professional activities, investigation is in progress under Articles 154 and 126envisaged by the Criminal Code of Georgia.

“The investigation is underway under Articles 187 and 126 of the Criminal Code of Georgia regarding the illegal actions observed near the building of one of the non-governmental organizations, where one of the citizens was allegedly injured by a pyrotechnic explosion.

“The Ministry of Internal Affairs once again condemns actions motivated by violence, including any form of violence against media representatives. Relevant investigative and procedural activities are being carried out on all mentioned facts. In order to identify persons involved in violent actions and violations, the video materials depicting incidents are being studied,” stated the MIA.

Regarding political assessments, the opposition says the government and the police are responsible for such results due to their inactivity and weak response, while government representatives claim that “former President of Georgia Mikheil Saakashvili and radical opposition are behind Tbilisi Pride, and their goal is to bring unrest and chaos to the country.”