Former President: Fraud Should Not Be Normalized 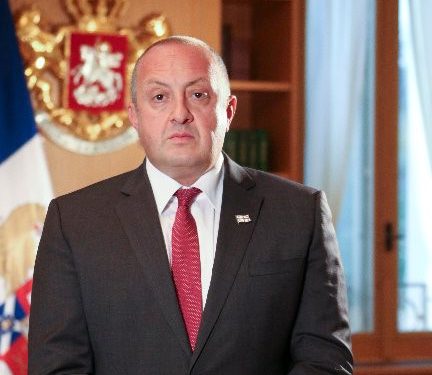 “It is always significant when such senior officials visit our country, and it shows both the Georgian people in the country and the occupants in the North that Europe has neither forgotten about Georgia, nor has it slowed its support.” – Giorgi Margvelashvili

The former president of Georgia, Giorgi Margvelashvili, in an interview with Formula, expressed his contentent toward the president of the European Union, Charles Michel’s visit to Georgia. He also reflected on the elections, as well us on Georgia’s relationship with Russia.

“I cannot hold back from giving a huge thanks to him for the important visitation that he planned and carried out in Georgia during this very difficult time. It is always very significant when such senior officials visit our country, and it shows both the Georgian people in the country and the occupants in the North that Europe has neither forgotten about Georgia, nor has it slowed its support. Georgia is crucial to the unity, safety, and various interests of Europe. The same can be said about the political processes Mr. Michel is carrying out in our country today,” Margvelashvili said.

“I’m delighted to see European senior officials with Georgia’s best interests at heart, to a high enough degree that they are ready to get involved in the process of negotiation and be so active themselves. At the same time, certain disappointment still remains towards our own selves because Georgians could not manage to talk to each other respectfully, without implementing political arrests and having political prisoners on the 30th anniversary of their independence, but such support from our European partners is very reassuring.”

Margvelashvili expressed his appreciation of the fact that the meeting with Charles Michel took place in the presidential palace, saying that he had shown Georgians that such political meetings and discussions should be taking place in that building.

“I am very hopeful that Georgian society, especially the elites that often lose control when going against each other, will be able to sit down at the same table, and the horrifying rhetoric that one political force uses against the rest of Georgia and that we have gotten very used to because of our government, will not be used in the presence of the European perspective.

“Weakening and destabilization of democracy in Georgia produces an interesting target for Russia’s growing interests in the region. Georgia has given out a lot with the help of its partners and their resources to bring this comical confrontation, and the comical efforts to label the country’s authoritarian development as “fair”, to an end.

[Referring to the government] “In politics, the crucial thing is to show that they did not get away with their lies. It is important to show certainty and stability and that lies will not be accepted and agreed upon. This is the solution. If I call someone out for fraud, then I should not sit with them and commit the same fraud. What matters  most to me is that some type of principal opposition happens regarding the rigging of the elections. If this is achieved, the trust toward the elections and the number of voters will grow naturally because they will see how fraud does not get formalized.” said Margvelashvili.