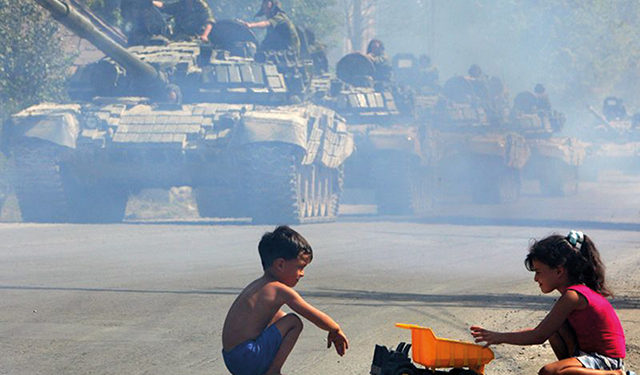 This year marks the 13th anniversary of the August 2008 war. Thirteen years ago, the Russian Federation invaded the country and occupied two Georgian regions, Abkhazia and Tskhinvali, so-called South Ossetia.

Since that time, thousands of residents have been displaced, persecuted, and impoverished. Many have lost their lives. The war lasted for five days (7–12 August).

228 civilians, 170 military officers and 14 police officers lost their lives in the war, while 1747 people were wounded. Almost 150,000 people were forced to leave their homes, 30,000 of whom remain as IDPs (internally displaced persons). Five soldiers also went missing.

On August 28, Russian President Dmitry Medvedev signed a decree recognizing South Ossetia and Abkhazia as independent states. In response, the Georgian government severed diplomatic relations with Russia. Russia only partially fulfilled its obligations defined by the 6-point ceasefire agreement, and its forces remained in the village of Perevi until October 18, 2010.

On October 23, 2008, the Georgian government passed the Law on Occupied Territories, giving the areas the status of occupied territories of Georgia by Russia.

Two Georgian regions, Abkhazia and Tskhinvali, remain occupied by Russia today, and Russia continues discrimination and violence against ethnic Georgians, restrictions on the right of education in the native language, the right to property, and even the right to life. Meanwhile, hundreds of thousands of IDPs and refugees are prevented from returning to their homes.

Several days before the 13th anniversary of this tragic date in modern Georgian history, Official Moscow released a statement, pointing at the necessity to “make relations between the two countries warmer and friendlier.” Namely, Deputy Director of the Information and Press Department of the Russian Foreign Ministry, Alexander Bikantov, said at a briefing on August 5 that Moscow is ready to restore relations with Georgia to the level “at which the Georgian side will be ready.”

Commenting on the 13th anniversary of the Russo-Georgian War of August 2008, Bikantov expressed hopes that “common sense will prevail in Tbilisi, and our Georgian partners will begin to build relations with neighbors, taking into account the balance of interests.”

He also spoke about the 13th anniversary of the August war, calling the government of former President Mikheil Saakashvili a “criminal regime.”

“A few days before the 13th anniversary of Russia’s large-scale military aggression against Georgia, the representative of the Russian Foreign Ministry made an attempt to create another piece of disinformation and propaganda narrative on the so-called new reality and the 2008 August war,” the Ministry announced.

“We would like to remind Russia that there is no parallel reality. The international community and international law are uniform in countering Russia’s aggressive activities, occupation and de-facto annexation. The European Court of Human Rights gave its name to the August 2008 war and established that in effective control of the Georgian regions of Abkhazia and South Ossetia, Russia is responsible for grave human rights violations during the war and following the occupation. The Strasbourg Court held the Russian Federation responsible for ethnic cleansing, putting an accent on Moscow’s failure to comply with the ceasefire agreement.

“Against such a background, the comment of the Russian Foreign Ministry regarding the anniversary of the 1783 Treaty of Georgievsk is cynical and absolutely unacceptable as it is in breach of this very treaty that Russia started annexation of Georgian territories and capturing lands in the South Caucasus. It is unfortunate that annexing territories of other countries remains Russia’s goal after centuries.

“In the present-day world, which is based on the norms and principles of international law, no-one is going to tolerate Russia’s attempts to undermine the rules-based international order and to forcefully redraw the borders of sovereign states in Europe, nor will they tolerate Moscow’s defiance of international obligations under the Ceasefire Agreement.

“If something goes against equal and good-neighborly relations between Russia and Georgia, it is Russia’s aggressive policy, its unlawful occupation of Georgian territories, violation of Georgia’s territorial integrity and breach of inviolability of internationally recognized state borders. A route to the good-neighborly relations between Georgia and Russia lies through de-occupation of Georgian territories and Russia’s respect for the sovereignty and territorial integrity of our country,” stated the Georgian MFA.

Also in response to the Russian Foreign Ministry, US Ambassador Kelly Degnan said that if Russia wants its statement taken seriously, Russia must first withdraw its troops from the territory of Georgia.

The US Ambassador noted that there is a format in the Geneva Talks for dialogue with Russia.

“Georgians have heard such messages from Russia before, but in order for Georgia to take this statement seriously, it is important that Russia, first of all, withdraw its troops from the territories of Georgia. It is important that Russia withdraws its troops from Georgian territory, withdraws recognition of South Ossetia and Abkhazia, and opens humanitarian corridors in these regions,” the Ambassador said.

On the 13th anniversary of the August War, President of Georgia Salome Zurabishvili, along with members of the government, paid tribute to the heroes who died in the war, at the Mukhatgverdi Brothers Cemetery, noting that August 8 should be a day of hope, not of mourning.

“We will all see the unification of Georgia. I want this day to be the day of the heroes whose devotion was a devotion to hope,” stated the President.

Local authorities and Georgia’s foreign partners publicly responded to the anniversary, condemning the Russian occupation and calling on the Russian federation to withdraw its troops from Georgian territories.

“Recently, the European Court of Human Rights ruled its verdict on the Russia-Georgia conflict and found the Russian Federation exercising effective control responsible for human rights violations in the August 2008 War. Russia must fulfill the ceasefire agreement,” he added.

“Unfortunately, the Russian Federation’s occupation of Georgian territories, and aggressive and destructive policy still continues,” said First Deputy Foreign Minister Lasha Darsalia in the village of Gegutiantkari, near the occupation line, where he met with civil society representatives, local NGOs and non-governmental organizations.

The Deputy FM noted that the Government of Georgia has set up a government commission on de-occupation and the peaceful settlement of the conflict, with the aim of establishing a common national approach and a unified national vision.

“Russia is now spreading anti-Georgia & anti-EU disinformation. The European Union is committed to the sovereignty and territorial integrity of Georgia and stands with its people until full de-occupation,” she added.

The EU Delegation to Georgia also reiterated its condemnation of Russia’s recognition of and continued military presence in Abkhazia and South Ossetia in violation of both international law and of its commitments under the 12 August 2008 agreement.

The US Embassy in Georgia once again condemned the Russian occupation and “borderization.”

In his video address dedicated to the 13th anniversary of the Russian invasion of Georgia, spokesperson of the US Department of State, Ned Price said, “We stand in solidarity with the people of Georgia and look forward to the day when they will be reunited.”