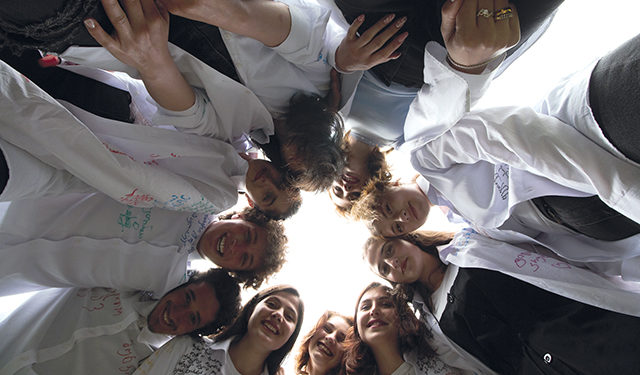 Time once again for that yearly ritual enacted in various ways all over the world: the celebratory ending of school studies for a class of pupils, usually at the end of their 12th or 13th year of such. Who of us knew, entering Grade 1, what lay ahead?!

Several of the Grade 12 pupils from Latali school, 10 km before Mestia, recently called and asked if I would be available as photographer for their school-end extravaganza. It would be in two parts: the school event, and a banquet two days later in a Mestia restaurant. We agreed on terms (they found my fee agreeably low) including petrol as I would be driving myself on both days. A nice change was the lessening of the nationwide curfew, now starting at 11 pm instead of 9, making evening travel much easier for all of us.

Did I have a drone to incorporate? No, sorry, not yet, but it’s on my wish list. What about shooting video for them too? I also declined this one, stating that stills and video must be handled by at least two separate people, allowing each to focus on their task without distraction from other activities. Anyway, they can always use the many videos being shot from multiple cell phones of fellow pupils, parents and teachers! I am not yet well versed in videography, but photography has been a specialty of mine since I was 11, so let it be that.

I actually got the first event’s date wrong, and showed up at Latali school a day early. This is easily done when you mis-hear 18th instead of 19th (very similar in Georgian) on the phone in your 4th language! My attempt to clarify using the word “zeg” (day after tomorrow) in the phone call had not helped, leading me to place most of the blame on the other party. But better early than late, anyway.

The next day I appeared again, an hour early as requested so that I could familiarize myself with the situation at this big, three-story school of 116 pupils. Meeting a few of the teachers in their common room, I found myself being asked to find husbands for several of the unmarried ladies… No promises, but we’ll see!

Eventually, the raucous graduating group of eight girls and two boys appeared in two cars. They each had a long-sleeved white shirt on, as the tradition in this country is to have as many people sign their best wishes on these in felt marker as possible. Once the signing was over, the bell was rung for the last time. Then they were announced one at a time into the nice, balloon-festooned little school auditorium, where the whole school and some parents were waiting for them with wild cheers and applause. 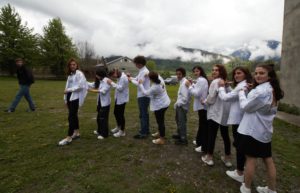 Followed a hilarious program of entertainment, with the few glitches from uncooperative tech, such as laptop-projector connection, quickly sorted out. These are your photos from when you were much younger, and projections by AI of how each of you will look at retirement! Other video clips of you over the years! Skits, jokes, speeches from teachers and grads, a gymnastics number, some Georgian dancing.

All the while, I snapped nearly 200 frames on my digital camera, delighted to no longer be attempting such a thing using 36-rolls of 35mm film and manual focus like I used to until 2008. Now, at least, I can see instantly what it is I’ve shot and how it is turning out. If there is a failure or flaw, I can address it straight away and continue: so much less stress!

Once the indoor program was over, we jaunted back outside for some more group shots, and this part concluded. Tomorrow is the banquet in Mestia, which I will also cover. Then the rest of these people’s young lives will begin, a new step, with all the hopes, wishes and dreams of the unwritten future ahead of them. Success and the meeting of those dreams I wish you all, as you take this giant step forward.