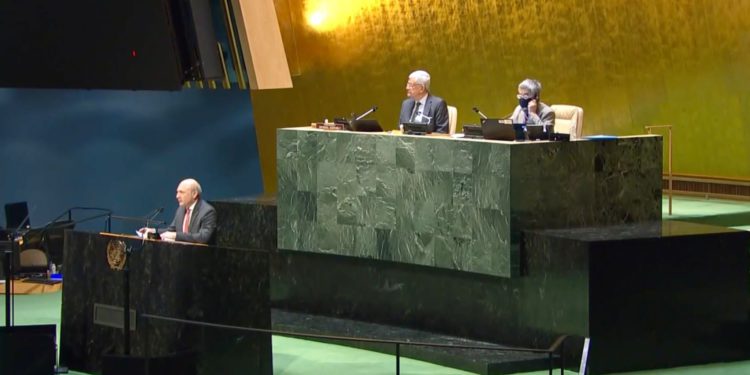 Source of photo: Permanent Mission of Georgia to the United Nations

Permanent Mission of Georgia to the United Nations has reported, in New York, the UN General Assembly, in its 74th session, adopted a resolution initiated by Georgia and 57 countries on the Status of Internally Displaced Persons and Refugees from Abkhazia, Georgia, and the Tskhinvali Region / South Ossetia, Georgia. The resolution was supported by 80 Member States.

Like last year, UN member states were given the opportunity this year to co-sponsor the resolution and thus become even more actively involved in international efforts to address the dire humanitarian situation created by Russian aggression and occupation. As a result, 57 countries from different regions of the world joined the ranks of co-authors of the resolution, which is an increase compared to last year. This fact shows that the mentioned resolution is already a global initiative.

Georgia has been submitting this resolution to the UN General Assembly since 2008. The resolution condemns the forcible demographic changes in the occupied regions of Georgia, affirms the right of IDPs to return to their homes in a dignified and safe manner, regardless of ethnicity, and emphasizes the need to respect and protect their property rights.

In addition to the humanitarian context, the resolution has practical implications, as it instructs the UN Secretary-General to prepare an annual report on the situation of the IDPs living in Georgia and on the implementation of the resolution. This is particularly important in light of the dire human rights situation in the occupied territories of Georgia and the lack of international monitoring mechanisms, which is another obstacle to the safe and dignified return of IDPs and refugees.

The resolution also calls on the participants in the Geneva talks to step up efforts to improve the security and human rights situation in the occupied regions of Georgia, which in turn will facilitate the return of internally displaced persons and refugees to their homes.

The Prime Minister of Georgia, Irakli Garibashvili, responded to the issue by saying: we welcome the adoption of the UN General Assembly Resolution on the Status of Internally Displaced Persons and Refugees from Abkhazia, Georgia, and the Tskhinvali Region. 57 countries in the region joined.

By adopting the resolution, the General Assembly once again condemned the violent demographic changes in the Russian-occupied regions of Georgia and strengthened the right of IDPs to return to their homes with dignity and safety, regardless of ethnicity. We thank all the states that supported the resolution and became a co-author of the resolution.

By this decision, each country, once again supported IDPs and the right of refugees to return and expressed support for each IDP.