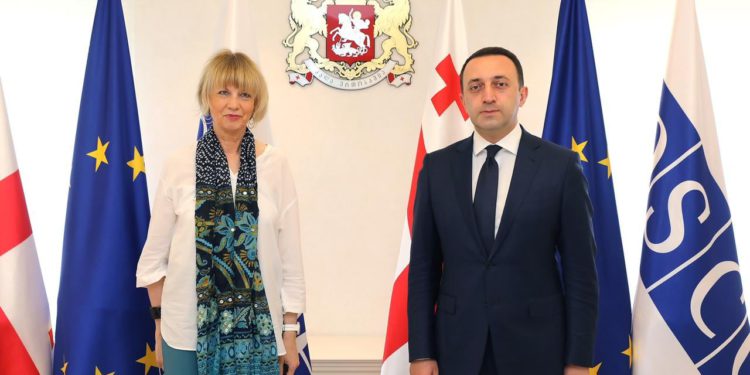 Source of photo: Government of Georgia

The Government of Georgia reported that the Prime Minister, Irakli Garibashvili, met with the Secretary General of the Organization for Security and Co-operation in Europe (OSCE), Helga Maria Schmid.

Issues of cooperation between Georgia and the OSCE were discussed at the meeting. The OSCE’s significant involvement in the peaceful settlement of the conflict in Georgia and the restoration of trust between the war-torn population was underlined.

The role of the OSCE Co-Chairs in the Geneva International Talks and in the format of the Incident Prevention and Response Mechanism was underlined. The Prime Minister stressed the issue of immediate and unconditional release of Zaza Gakheladze and all other illegally detained Georgian citizens at all levels, including in the format of an incident prevention and response mechanism.

It was emphasized that despite the difficult security and humanitarian challenges, the Government of Georgia remains committed to the peaceful settlement of the conflict and the process of democratic development of the country.

It was emphasized that the Georgian side appreciates the ODIHR’s involvement in the election observation process. Readiness was expressed for the country to receive the maximum number of ODIHR observers in the upcoming local elections.

The meeting also focused on the active role of the Human Rights Secretariat of the Government Administration and its involvement in OSCE-organized activities on human rights and gender.

The OSCE Secretary General praised Georgia’s mediation in the Caucasus and the involvement of Prime Minister Irakli Garibashvili in this regard.