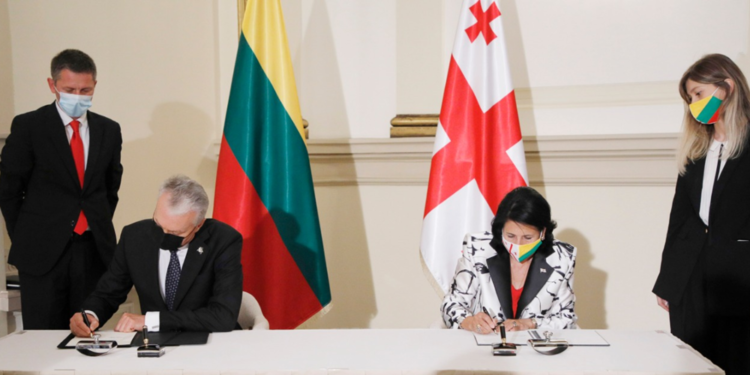 Presidents of Lithuania and Georgia have signed a joint declaration in support of Georgia’s sovereignty, territorial integrity, and European and Euro-Atlantic integration.

President Gitanas Nauseda visited Georgia and met with the President of Georgia at the Orbeliani Palace. After the signing ceremony, the presidents held a joint briefing.

Salome Zurabishvili expressed her joy over the visit of the President of Lithuania.

“We overcame the internal political crisis and the EU played a very important role in overcoming it. It was a sign of how important Georgia’s political stability and stability in the region is for the EU,” Zurabishvili said.

“It will be important to mention the issue of Georgia and Ukraine at NATO summit on June 14 and NATO’s open-door policy – we will get signs on how and in what way we will continue our integration path!” said Zurabishvili.

The President noted she had received a promise that Lithuania would help Georgia with vaccines and deliver a certain amount of the vaccine (which has yet to be confirmed) to Georgia.

“We need to restore tourism relations as soon as possible, which, after this very difficult period, is a very big part of our economic recovery. Our borders are open to vaccinated and PC-tested people!” stated the President of Georgia.

President Nauseda in turn noted: “When I look at Georgia, I am reminded of Lithuania, which once fought for EU and NATO membership. Our path was not easy and lasted relatively less time, but we always knew what our goal was and there was no doubt in our society. We also see similar diligence among the Georgian people, so we signed a joint declaration with the President, which not only supports Georgia’s sovereignty and territorial integrity but also its European and Euro-Atlantic integration,” the Lithuanian President said.