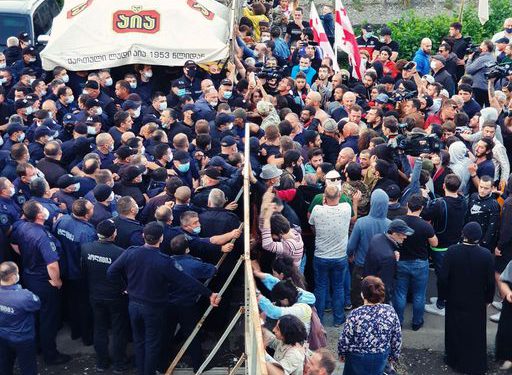 Source of photo: To Save the Rioni Valley

As one of the protesters, Marita Museliani, says, they are trying to stop the transposing of equipment. To date, no equipment has appeared in the area.

“We will try to control everything so that we do not go beyond the law. becoming destructive is unacceptable to us. As for the plans, let’s see. Yesterday’s clash, daily tensions are rising and the spark is rising. We try that this situation not to become uncontrollable and we try to stay constructive, as it was before, not to do anything wrong because we are dealing with a big violation by the government, that people find it very difficult to control emotions and we try not to let these emotions cross the boundaries “, Says one of the protesters Marita Museliani.

Varlam Goletiani, one of the organizers of the rally, says that the police forces have become an official carrier for the company “Enka”.

“We see, that the convoy passed through, I mean the police pickups with the company employees and workers sitting in the back seats. Since we are standing here and saying that we are restricting the transposing of company equipment, it seems that they found this method and the company workers have been transferred to police cars. It is important to block the road so as not to transfer equipment to the other side, which the company will definitely need.

We can not get into a confrontation with the police, it just is not right and we are not going to go in that direction. It is necessary for the public to know that the police have completely violated the law because it is not their function and duty to drive Enka employees into the gorge with their own cars or how long this process will continue,” Goletiani said.

According to him, the behavior of the protesters does not exceed the law.