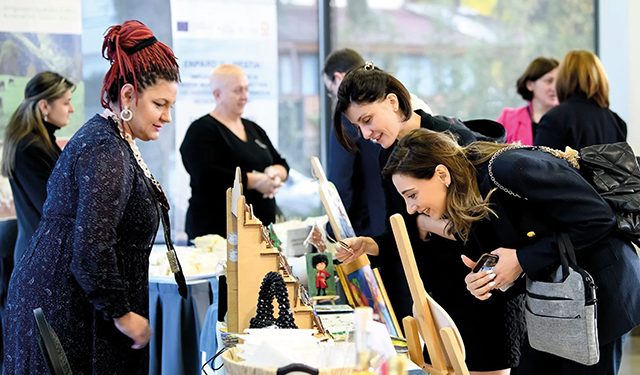 In parallel with the discussions, the conference hosted an exhibition of agricultural produce from across Georgia

The EU and its partners celebrated progress made, acknowledged ongoing challenges and discussed future steps in achieving sustainable, inclusive and green rural development in Georgia at the conference ‘LEADER: A European Approach to Better Rural Lives’ at the end of November. There, the EU-funded ENPARD program, with a total budget of €234.5 million, summed up its 10 years of work in the country.

Since 2013, the ENPARD program has assisted in aligning Georgia’s institutional, legal and administrative systems with EU standards and introduced European models of rural development.

The conference in Tbilisi highlighted the following successes of ENPARD’s third phase:
• More than 2,600 jobs were created or retained in key areas of the program, two-thirds of which (1,700) were held by women;
• Almost 7,000 men and women in rural areas acquired new skills for employment through vocational education;
• The Local Action Groups (LAGs) established under ENPARD III have equal numbers of male and female board members, helping to ensure that strategic decisions about local development are made jointly by women and men.

Georgia’s progress towards sustainable, inclusive and green rural development was the focus of the conference ‘LEADER: A European Approach to Better Rural Lives’, attended by H.E. Pawel Herczynski, Ambassador of the European Union to Georgia.

The conference summarized the impressive results of the EUR 234.5 million EU-funded ENPARD program, an almost 10-year-long effort to introduce European rural development models in Georgia and ensure a sustainable future for Georgian farmers and rural communities.

Georgia has achieved steady progress in modernizing its rural development through policies and practical initiatives. The European Union salutes these achievements

“Rural development is an important cooperation area between the European Union and Georgia,” said Ambassador Herczynski during his opening remarks.

“Sustainable, inclusive and green rural economies push people out of poverty, create employment and set out a pathway to sustainable growth, benefitting people and the environment. Georgia has achieved steady progress in the last ten years in modernizing its rural development through policies and practical initiatives. The European Union salutes these achievements and remains committed to supporting new opportunities for rural communities.”

“The Government of Georgia has been taking significant steps over the years to promote the development of rural areas,” said Otar Shamugia, Minister of Environmental Protection and Agriculture of Georgia. “This critical work is in line with Georgia’s national priorities on the path to European integration. Georgia’s new National Strategy for Agriculture and Rural Development for 2021-2027 provides a clear roadmap towards a competitive rural economy, improved livelihoods, better environmental protection and the sustainable management of natural resources.”

The summary event brought together Georgian decision-makers, civil society and the private sector, as well as representatives of municipalities, Local Action Groups and communities.

Representatives of the Austrian Development Cooperation and the Embassy of the Czech Republic in Georgia contributed to the discussion with their insights on Georgia’s rural development prospects. Government representatives and the ENPARD program partners discussed Georgia’s efforts to adopt the best economic, social and environmental practices in rural development and to institutionalize European approaches, such as LEADER. In parallel with the discussions, the conference hosted an exhibition of agricultural produce from across Georgia.

Background
Since 2013, the EU has supported Georgia through the ENPARD program and assisted to align the country’s institutional, legal and administrative systems with EU standards. The program has consistently shown a Team Europe approach with EU Member States, including Austria, the Czech Republic, Estonia and Latvia, sharing their experience. The EU and partners have introduced best practices and approaches, such as the LEADER and CLLD approach, which have resulted in a range of local initiatives reaching out to people, businesses and communities across the country.

Over the past years, the EU’s support to Georgia has triggered a change in rural areas across the country.