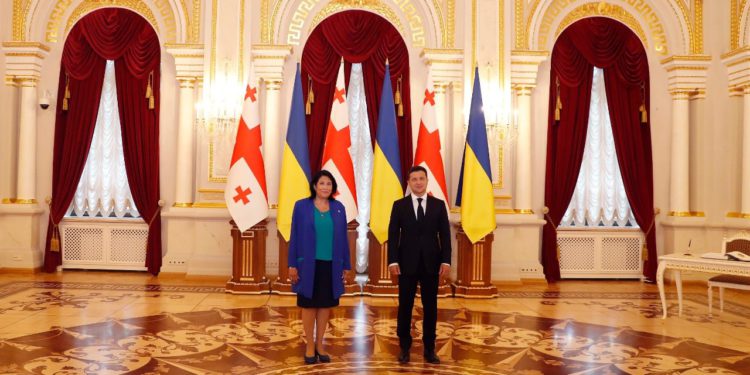 President of Ukraine, Volodymyr Zelensky, noted he believes the political dialogue between Kyiv and Tbilisi is gaining new momentum. He said so at a joint press conference after the official meeting with the President of Georgia Salome Zurabishvili.

“I’m glad to greet Mrs. Salome Zurabishvili and our Georgian friends in friendly Ukraine. This is the first official visit, which is very important for strengthening the strategic partnership between our countries. Political dialogue between Kyiv and Tbilisi is gaining new momentum. Our joint task is to fill the format of strategic partnership between Ukraine and Georgia with real content, based on mutual support for specific projects and a high level of trust between us.

“Ukraine and Georgia share common goals for full membership in the European Union and NATO. I should also note the similarity of our position on the further development of the Eastern Partnership. One of the important tasks for Ukraine and our partners is to strengthen security cooperation in the Black Sea region. The Black Sea should be a safe area for free trade and navigation. We seek to strengthen the relationship between the fleets of our partner states in the Black Sea. We are actively working with Georgia and other neighbors to implement this initiative, and I hope we will see progress soon,” Zelensky said.

“Our relationship is returning to its normal, which is based on two principles: centuries-old friendship and constant and unwavering support for each other’s territorial integrity and sovereignty,” Georgian President Salome Zurabishvili said at a joint press conference.

She emphasized the importance of treating mutual relations and the centuries-old friendship between the countries carefully.

“On April 23, 2020, I expressed my concern about the problem that arose in our relationship. In my parliamentary speech on April 9, 2021, I stated that I didn’t want to end it on April 9, which is the day of strengthening our independence, without mentioning the current struggle of our Ukrainian friends and express solidarity,” Zurabishvili said. “I believe that today, as a sign of solidarity, it is necessary for the Ambassador to Kyiv to be back, it was followed by a formal restoration of our relations, followed by several visits, the Prime Ministers’, the Foreign Ministers’ and our official meeting here today. I am grateful for this and I believe that the presidents of both countries should treat with care the relations between our countries. Our relationship is returning to its normal, which is based on two principles: the centuries-old friendship between peoples and constant and unwavering support for each other’s territorial integrity and sovereignty.”

The President of Georgia is paying an official visit to Ukraine.

On June 23, the official welcoming ceremony of the President of Georgia was held at the Presidential Palace of Ukraine in Kyiv.