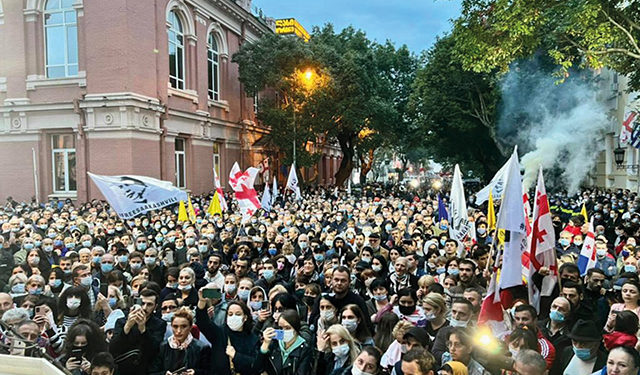 The nation is totally and absolutely overwhelmed with just one issue: how to handle legally and physically, in the fairest possible way, the convicted third president of Georgia. Any other problem of national magnitude has been overshadowed by this. Georgia has stopped development and is paralyze; split and polarized so disastrously that an optimistic projection of the situation has become practically impossible.

The people of this country, as socially anxious and politically obsessed as they happen to be right now, are losing the judicious ground under their feet. The political delirium in which our good citizens have found themselves is having a lethal effect on the nation’s future. All human interests have been dejected, elementary human pleasures have been eradicated, and most of our healthy minds have been warped to the extent of stupefied stagnation. Lost between the two drastically differing psycho-political discourses, the ruinously dichotomized nervous system of the nation is being deleteriously shaken to the point of arresting its functionality. Our moral endurance capability is on the verge of explosion, and there is nobody out there to calculate the damage.

Are we going to recover from this diabolical quandary? Unlikely, because the nation has limited resources for survival, and that limit is currently at stake because of the uncanny self-exhaustion we are faced with. And no source to replete that vainly wasted national energy can be seen on the horizon. We certainly need help, the outside assistance, a friend’s hand and shoulder, but the world doesn’t seem to be handling our story in the wisest possible way. The casual world has standards of international behavior, deviation from which raises eyebrows, but raised eyebrows alone are utterly irrelevant to what’s going on with our blameless but terribly weakened people at this moment in time.

The question is still open why the former president wanted to permeate the already balanced and healed social-political tissue of this society, and do so on Election Day. Everything is in doubt and under question. Most of us are at a loss, unable to tell wrong from right, having no clue how to discern between truth and lie.

Who is going to say whether the much-talked-about convict, strangely swollen out of his significance as a political animal, is guilty or innocent? And if he is guilty, what should the State of Georgia do in order for all of us here to get the feeling of justice done? Or does justice matter no longer in this land? If he is innocent, will the world have a say in handling his innocence with genuine righteousness? There is something nearly suicidal in puffing the issue into hyperbolized parameters, where the bridges seem to be burning irretrievably.

There is a weighing scale of stakes that any nation must be equipped with, which Georgia seems to have lost for good. Our weathervane is flapping around like a broken toy and has no sensitivity to the climate around it. Why are all those stakes so badly ignored and forgotten? Are we going to put an end to that development indispensable for our kids’ prosperous and healthy future? The invisible killer of joy is around to finally deprive us of hope and opportunity. Why are we giving preference to just one issue, determining if the renowned convict should be freed or stay jailed? Shouldn’t we care more of the happiness and wellbeing of the remaining four million Georgians that need to be taken care of? It seems our capability to handle both is at the nadir right now. There is something very dark about the whole thing. There is a huge devastating wave moving on Georgia, whose current government has been overwhelmed with unknown-before headaches: looking after the economy without which we are all in trouble; handling the notorious culprit so sagely that not even a piece of hair falls from his head; coping with sporadic international discontent; remaining within the Euro-Atlantic framework of development; the perennial problem of territorial integrity; keeping together the spiritual integrity of our people; tolerating and handling with dignity the mixture of media rights and wrongs; optimal budgeting of the country’s financial and other resources; keeping intact our cultural and spiritual values; feeding the elderly and fortifying the youth for future struggles; being in close and useful touch with the rest of the world. How felicitous are meanwhile the forces of opposition: just take to the streets and talk at the highest pitch, and get in the way of those who are factually responsible for our survival at this harshest time in our history. Aren’t they lucky!

OP-ED by Nugzar B. Ruhadze