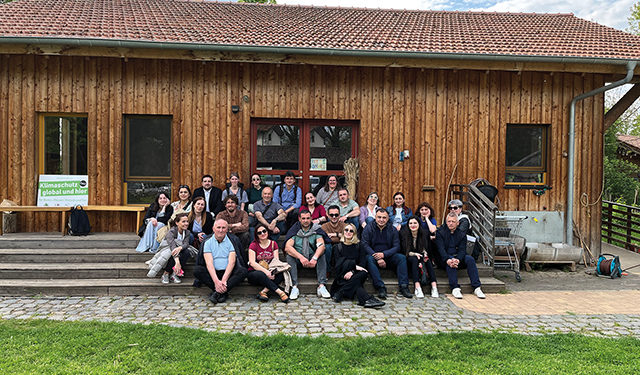 Experience-sharing between farmers from different countries can greatly enhance the role of agriculture as an engine of economic growth by making it possible for agriculture to grow considerably faster and introduce novelties for its development.

To help local farmers increase their awareness and get acquainted with the international practice, within the framework of the EU-supported “EMBRACE Tsalka” project, members of the Tsalka LAG, project beneficiaries, and government representatives participated in a week-long study visit to the Frankfurt, Hohenlohe-Tauber, and Hunsruck regions of Germany.

The study visit, which was assessed as “very fruitful” by both sides, was organized by the German partner organization, Institute for Rural Development Research (IfLS).

The study visit allowed the 20 participants to discover exciting details about the European LEADER approach and German practice, as well as the chance to network and exchange information. The Georgian group met local actors and officials from the federal state level, and visited LEADER financed projects in the federal states of Northrhine-Westphalia, Rhineland Palatinate, and Baden-Württemberg.

The tour kicked off with a visit to the biodynamic farm Dottenfelder Hof in Bad Vilbel near Frankfurt. Till Bause, representative of the farm, walked the participants around the different working units. His guests showed particular interest in the farm’s approach to circular agriculture, livestock farming with a focus on animal welfare, and direct marketing of products. 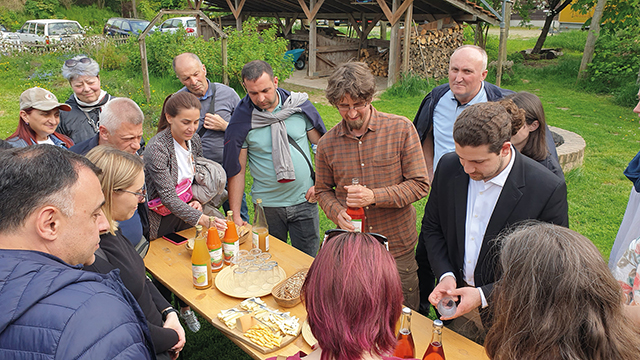 On Tuesday morning, the group was welcomed by the Ministry of Economy, Transport, Agriculture and Viticulture to discuss the federal structures with regards LEADER approach. In Germany, LEADER is managed by the federal states. The aim was to get to know the practice of two federal states in order to draw conclusions for different possibilities and to compare what was learned.

A second highlight was the guided visit to the village of Herrstein, where LEADER financed the valorization of the town’s historic center. The guide, former mayor Wolfgang Hey, who was involved in the project for many years, showed restored timber frame architecture and shared his experiences on managing a LEADER funding process. The Georgian side enjoyed finding out about the possibilities involved in conserving cultural heritage and cultivating places of tourist interest aided by LEADER. They also highly valued Herrstein’s ambitions to train craftsmen specializing in traditional half-timbering.

Throughout the visit, the participants were able to connect with representatives from local action groups (LAGs): LAG Erbeskopf, LAG Mittelrheintal, LAG Hunsrück, and LAG Hohenlohe Tauber. 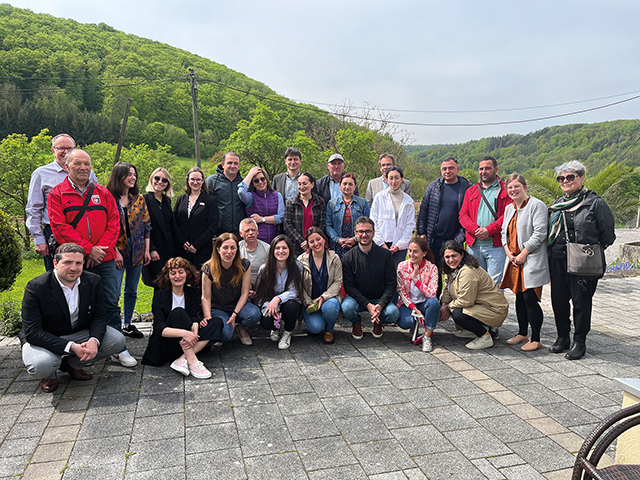 The delegation from Georgia spent 7 days visiting various LEADER action groups in Germany. Projects were visited, discussions were held with local actors, and an intensive exchange of ideas took place

“All of them shared their experiences with LEADER and the different ways of working due to different work priorities. Mr. Schultes has over 20 years’ experience as a regional manager. The exchange with him was considered very valuable,” IflS said.

The Hohenlohe District wrote an article on their website, translated by IflS, entitled “Great interest in LEADER projects and the work of the LEADER Association Hohenlohe-Tauber.” 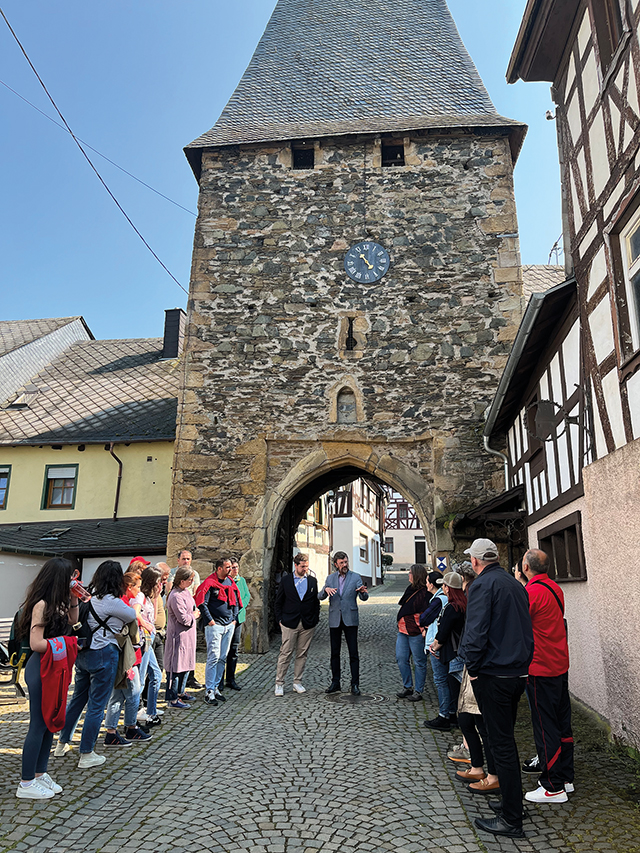 “The delegation from Georgia spent a total of seven days visiting various LEADER action groups in Germany. Projects were visited, discussions were held with local actors, and an intensive exchange of ideas took place,” the Hohenlohe District reporter wrote. “The topics were agricultural cooperatives, milk production and processing, tourism, processing and marketing of regional products, business start-ups, projects especially for women and youth and the European LEADER funding program.”

“Promoting Rural Development in Georgia is a significant progress on the country’s path to the Euro-Atlantic Alliance,” noted Melano Tkabladze, CENN Project Manager. “The ENPARD program has an important role to play in this regard. The introduction of the LEADER approach and the formation of local development groups (LAGs) in different municipalities of Georgia are especially interesting and meaningful. This practice significantly teaches us and accustoms us to the effective involvement of all stakeholders in the decision-making process through a participatory approach. 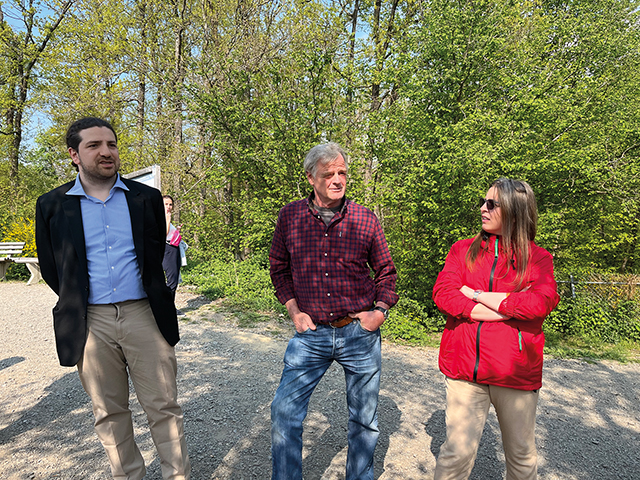 “The 1-week practice of the Tsalka LAG visiting the German lags is a visible demonstration of these processes,” she added. “The tour and the impression gained on the institutional arrangement of German LAGs, the recognition of LAGs by local and national government agencies, their funding sources and necessity, the degree of local involvement, etc., will significantly help the Tsalka LAG to continue to operate more effectively in the municipality in terms of its development and socio-economic sustainability.”

“The exchange visit was very productive and interesting both in terms of professional aspects as well as values,” said Milena Georgieva, Tsalka LAG member. “We got acquainted with many interesting communities, projects, entrepreneurs, and mayors, whose goal is not only personal but also public welfare, and every day they try to contribute to the economic or social development of the community.

“This visit made me even more convinced that with the right set of priorities, your activities and responsibilities take on a completely different look, you look at the picture from a different angle, it is important to set your personal interests in accordance with those of the community’s and love your business not only for financial gain but also because the process is valuable to you. It was obvious when we visited the farmers in Germany,” Georgieva noted. 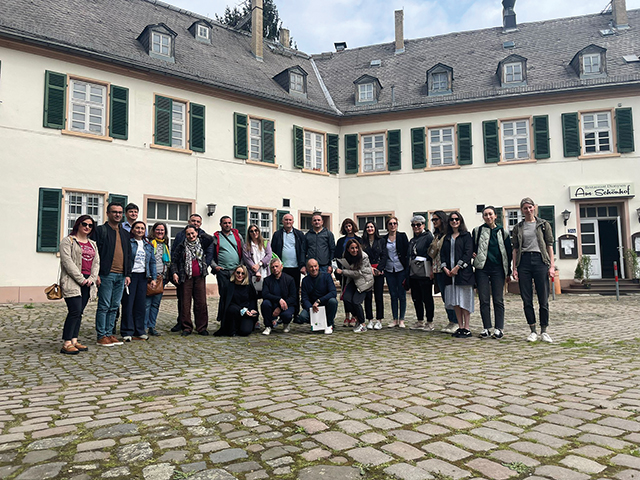