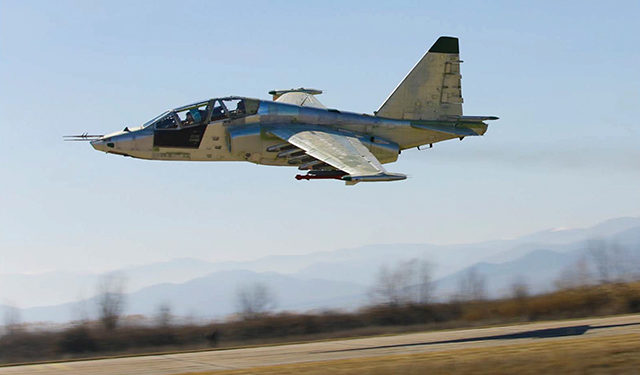 The Su-25 has its technology geared towards engaging enemy ground forces. The lack of an air-to-air component is a dangerous gambit, despite Georgia’s excellent surface-to-air capabilities and history. Image source: Georgian Defense Journal via Twitter

The recent Independence Day celebrations on May 26 were a beautiful moment of national pride. It was also a showcase of some of the nation’s defense and security forces, complete with a flyover of the nation’s newly updated Su-25UB Close-Air-Support (CAS) attack aircraft, codenamed in NATO circles as the “Frogfoot.” This is a great achievement in terms of national defense advancement and expansion.

The country’s natural predator, Russia, isn’t going to be deterred by three updated airframes.
Georgia’s friends, particularly the United States, are in the business of producing, upgrading, and most importantly selling some of the world’s best aircraft technology. With the United States and other NATO states moving their military aircraft platforms to newer 5th or even 6th generation aircraft, such as the F-35A Joint Strike Fighter, this puts Georgia in a proverbial fork in the road: join the acquisition of F-35s, or buy up all the discounted F-16, F-18, and other European military aircraft.

However, the Georgian Ministry of Defense has already come to an agreement with Tbilisi Aircraft Manufacture (TAM) to continue upgrading the remaining Su-25UB and Su-25KM planes. This platform was first produced in the late 1970s, being introduced formally in 1981 to the Soviet Air Force, and is now a largely outdated airframe, particularly in the framework of Black Sea/South Caucasus defense.

As Georgia was one of the manufacturers for these aircraft, after the fall of the Soviet Union it was stuck with both the plant and the planes. The two variants now in service are the Su-25UB, a two-seat training model, and the Su-25KM, a significantly upgraded model. This upgraded model is the primary attack model, engineered in the early 2000s in tandem between TAM and an Israeli company, Elbit Systems.

With advanced aerodynamics, targeting and weapons control, and new GPS navigation systems, these 6 models (still yet to be flight-ready) would be the best chance in a renewed air war in the region.

However, the Su-25 is a CAS aircraft and as such has virtually all of its technology geared towards engaging enemy ground forces. The lack of an air-to-air component is a dangerous gambit, despite Georgia’s excellent surface-to-air capabilities and history. The need for near-peer air combat capability is still relevant and should also be included in the patrolling force NATO conducts over their skies.

At first glance, the F-35 platform offers all the benefits and incentives there could be for a growing Air Force. However, Georgia may not be the best candidate for its implementation. It’s expensive, so much so that the Georgian treasury may buckle under that sort of financial weight. Even with its implementation, this must be observed under “worst case scenario” conditions. If these highly effective aircraft are so deep within the Russian airstrike range, they would be the first targets in a renewed conflict. For the duration of the conflict they would simply be burnt hulks on a tarmac. Hardly worth the exceptional price tag.

The veteran F/A-18 platform offers a multi-role fighter that could serve perfectly in a reinvigorated Georgian Air Force. With its similarly upgraded systems it stands to, albeit only somewhat, level the air playing field. Russian attack aircraft would face greater deterrence, in addition to the deadly Georgian anti-air artillery. In addition to countering any air aggression, this would allow Georgia to effectively join NATO’s air patrols in deterring Russian incursions in the Black Sea region.

With the United States and much of Europe’s militaries slowly phasing out these air platforms, Georgia could ostensibly obtain these at below market value. Next, the issues of supply and maintenance come into the picture. In addition to the purchase of the airframes, the purchase would have to include parts, software, and training from the seller. This could prevent the effective use of this new aircraft from being fully combat ready for months or even years. In addition to this, the recruitment needs for new air squadrons would be included.

Despite this, it’s not without note that a rebranding and recruitment surge would not hurt the nation. Remodeling their approach to young and eager patriots is something that could be a happy byproduct of adding new aircraft to the fleet. Additional engineers, maintenance crews, administrative staff, trainers, and pilots would provide a great opportunity for Georgians to renew their view of Georgia’s largely overlooked Air Force.

However, it could also be that Georgia does not cease its own production. The continued production of Su-25s would expand the offensive and defensive capabilities against ground targets, as well as be available for export. A collaboration between the MoD and TAM is planning to produce the aircraft as their own model, renamed as the Ge-31 Bora.

A combined Air Force of ground attack, air-to-air, and air reconnaissance aircraft would put Georgia in command of the skies over the Eastern Black Sea and much of the Southern Caucasus. While it can be easily said that the costs in time, money, and human resources is too heavy, this investment of all involved resources only strengthens Georgia’s long-term position of dominance. This dominance is something overdue, and should never be out of the focus of the Ministry of Defense. Georgia is still a force for good in the region, along with its strategic partners and NATO as a whole.