US to Fund Restoration of Zugdidi’s Dadiani Palace 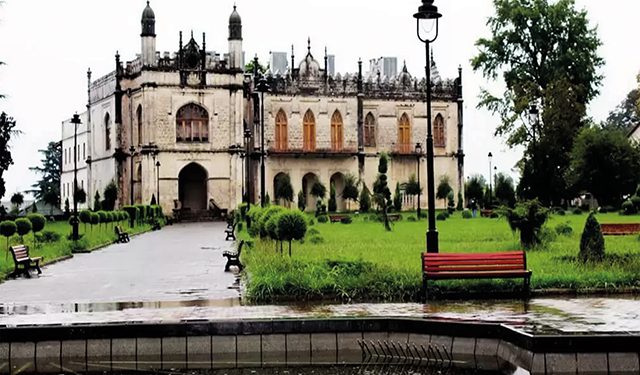 To mark the beginning of the restoration of Dadiani Palace, US Ambassador Degnan paid a visit to the Art Palace of Georgia, Tbilisi, where she announced a $290,000 project to restore the Queen’s Palace in Zugdidi and preserve the museum’s collections.

Dadiani Palace was the historical home of the rulers of Samegrelo, a part of western Georgia that at times included now-occupied Abkhazia. The project will largely focus on renovating the historic Queen’s Palace building and creating a display space for its irreplaceable historical collection, in collaboration with the Art Palace of Georgia – Museum of Cultural History.

“Today was a great day in the history of the Art Palace and the palace of the Dadianis of Zugdidi,” noted Giorgi Kalandia, Art Palace Director. “Another big win for Art Palace and its team, our museum has won a grant from the American Embassy to be used for the rehabilitation of the Queen’s Palace in Zugdidi. It comes as a result of the close cooperation between the Art and Zugdidi Dadiani palaces, the result of the friendship, sharing of experiences and professional alliance between the museums of Georgia, and is the fruit of the support of the Ministry of Culture,” he said.

“I congratulate the whole team, especially the director of the Zugdidi Museum of Dadiani Palaces, Davit Okujava, his excellent team; we thank the professionals of the Art Palace for their hard work, which made this result possible,” Kalandia continued. “I would also like to thank the Minister of Culture Tea Tsulukiani, representative of the US Embassy Chris Anderson, and employee of the embassy Tako Rtveliashvili. The support of each of them led to the victory of the project! And thanks to Ambassador Kelly Degnan for her kind words and compassion!”

Following the rehabilitation carried out last year at the initiative and support of the Ministry of Culture, Sports and Youth of Georgia, new exhibition and educational spaces were opened in the Niko’s Palace of the State Historical-Architectural Museum of Dadiani Palaces of Zugdidi, and a new exposition was exhibited in the Queen’s Palace. The complete rehabilitation of Niko’s Palace was carried out with the support of Cartu Foundation in 2016-2019, and after Cartu, the Ministry was involved in the revival of the other palaces. Ekaterine Dadiani’s residence, the Prince’s Hall, Prince Andrew’s Room and The Emperors’ Gallery were closed for over six months due to a collapsed ceiling.

Funded by the Ministry of Culture, the first phase of emergency works in the Zugdidi palaces was carried out in 2021, and visitors had the opportunity to see the Queen’s Palace in full alongside a new exposition, where many of the items were exhibited for the first time.

The latest renovation will promote the Zugdidi museum as a venue for cultural interaction with locals and draw tourists from beyond the area. The museum will also create an elaborate program for frequent student involvement, including field excursions.