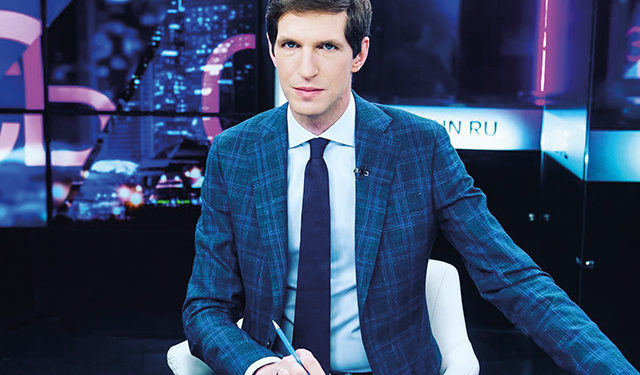 As the dust settles on the infamous Pozner saga, and tempers are no longer flaring, it is perhaps time to take a sober look at this, yet another “Kremlin-friendly Russian visits, Georgians surprisingly not thrilled” scenario. And as it is swiftly becoming a curious mix of tradition and something of a national pastime, now might be as good a time as any to start analyzing it. To that end, GEORGIA TODAY spoke to Tikhon Dzyadko, Editor in Chief at TV Dozhd, one of the few remaining independent TV channels in Russia.

You wrote: “To step on the national tragedy of the country with your statements about Abkhazia, and then go there like nothing happened.” Where do you think he got the nerve to do that?

First of all, I think freedom of speech is important in Georgia, as a democratic country. If Pozner thinks Abkhazia is not part of Georgia and never will be, he has the right to say so, and he still has the right to come and visit Georgia. But at the same time, he has to be prepared for the fact that a part of Georgian society won’t be happy with such words, and that yet another part of society might choose to express their discontent in not so pleasant ways. Another thing to consider is that Vladimir Pozner might just not understand, like many who live outside of Georgia, that despite the fact the war happened about thirty years ago, the gravity of it has not passed from Georgian memory. It remains a huge problem for Georgia.

He might not understand the problem, you say. Many were left with the impression he doesn’t even understand that Georgia is a sovereign country, period.

It was ugly, but I think he’s aware that Georgia is an independent country. And I think responsibility lies also with his entourage that arranged this trip, got the quarantine clearances and so on. The third party involved is the Georgian government, which greenlighted it all. I think of it as an example of foolishness. I don’t think Pozner did this to demonstrate his disregard toward Georgian sovereignty. But the way he acted left that impression: it was like Spanish colonizers going to South America.

Why is this notion of “Big man from Moscow visiting Georgia” so persistent? Should we seek its roots in similar visits over the decades?

The thinking goes that “if we have money and we have friends in the right places in Georgia, then we can get a beautiful holiday for ourselves, even if everything is otherwise closed, because doors will be opened for us.” It’s a multi-layered problem. The first layer is the conflict itself, what happened between Georgia and Russia. The second is the covid situation, the curfew and its limitations. The third layer exacerbating the situation is the ongoing political crisis in Georgia. And when you’re one of the main faces of a Kremlin-backed TV channel, all of this creates a Molotov cocktail. I don’t think it was a premeditated gesture on his part, I think he and his entourage simply didn’t think it through, and that’s why a lot of people in Georgia felt humiliated.

What is the reasoning behind people’s reactions, with some vehemently against his visit, and others shocked at the treatment he received? Is it down to Russian propaganda?

There’s another faction, and many friends of mine belong there too, that didn’t like what Pozner did, but we weren’t exactly thrilled about egg-throwing and painting of statues as a means of protest. It was seen as compromising the protest’s credibility. And if you read what has been written about this precedent in government-run Russian press, you will see that no-one is talking about Georgia, about Abkhazia, about the motivation, about covid. All they show are the ugly pictures of people throwing eggs, and vandalized statues. That’s how Russian propaganda works. It very nicely tied into the narrative that Russia is a besieged fortress, surrounded by enemies. It is well aware that it should show the ugly side of it, instead of the noble one.