After a challenging 2020 and early 2021 for the tourism sector, various positive developments, such as the alleviation of restrictions, were seen in the tourism sector in Georgia in the second quarter of 2021. As of July 2021, there are no restrictions of movement in place within Georgia, and both land and air borders are open for eligible visitors. Below is a timeline of the relaxing of various COVID-19 measures in the second quarter of 2021: 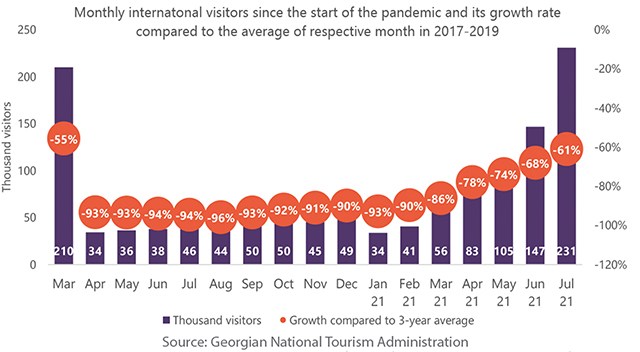 The prospects of the tourism sector’s recovery in 2021 have also received a significant boost from developments in the aviation industry. According to Mariam Kvrivishvili, Deputy Minister of the Ministry of Economy and Sustainable Development, as of July 2021, 72% of the number of direct flight routes had been recovered, compared to 2019 levels. In particular, Batumi International Airport has shown rather positive tendencies, with growth of 21% in terms of the number of flight destinations compared to 2019 levels*. 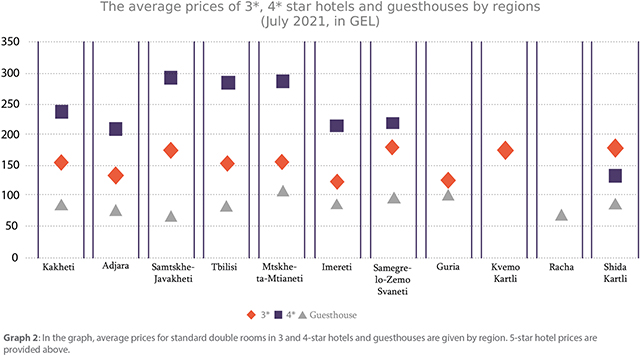 The tourism sector also received another boost recently as in the updated state budget of 2021, the Georgian National Tourism Administration’s budget was increased by GEL 10 mln . In addition, Georgia has been elected to the Executive Council of the UNWTO for four years, which will allow the country to have a say in global developments in the tourism sector.

These positive developments have resulted in a significant increase in the number of international visitors since March 2021. Moreover, apart from absolute numbers, the growth has also been evident with respect to the pre-pandemic levels of visitors (defined as average number of visitors in respective month in 2017-19) – in March 2021, only 19% of pre-pandemic level was recovered, while in July 2021, this figure amounted to 39%.

However, there are significant obstacles that persist in the way of recovery. In particular, the significant increase in number of COVID-19 cases and deaths in recent weeks raises uncertainty about tourism’s recovery in 2021 and beyond. Pertinently, this spike has recently resulted in Georgia moving to the red country list of Israel, one of Georgia’s key source markets, especially in 2021 so far. This has already resulted in Israel moving from 2nd place in terms of visitors in June to 5th in July. Moreover, despite the rollout of a general vaccination program, and a specific program for the tourism sector, the vaccination process has not been fast enough so far, with most of the sector and the country still unvaccinated (even with the vaccination rate picking up in recent weeks). In fact, some measures for curbing the spread of the virus have been reinstalled. Rapid scale-up of the vaccination process and mitigation of the spread of the virus is crucial for sustaining current positive developments in the sector. 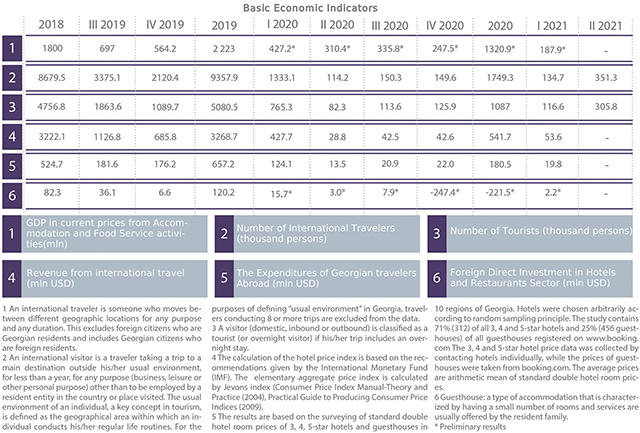