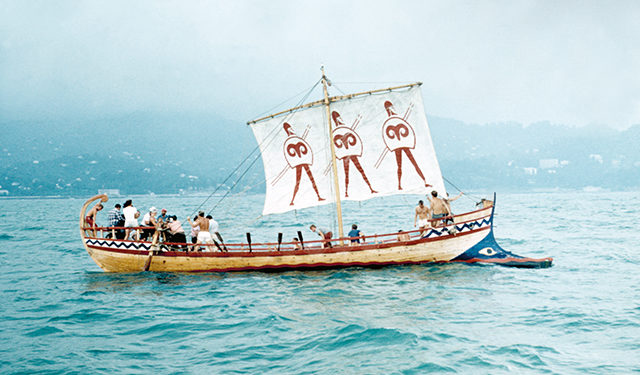 December 18, 2020, was a grief-stricken instant for professional travelers of the world, and certainly for every single participant in the ‘Jason Voyage’ of 1984, because that sorrowful winter day, the venerated British explorer, scientist, historian, filmmaker and writer Tim Severin at age 80 departed his audacious exploratory life. Let his great soul rest in eternal piece!
Tim’s legendary journeys, reconstructing the voyages of mythical, historical and literary celebrities, will forever remain in the annals of travel adventure. This was a British intellectual who wanted to disperse any doubts about the ancient Greeks entering Georgian waters in a wooden boat called the Argo and navigated by Jason, the well-known Hellenic mythical hero. Indeed, the much-talked-about trip was elegantly replicated by Georgia’s wonderful friend Tim Severin, which he and his crew performed with such precision that the public both in Georgia and worldwide were totally fascinated.
Tim fell in love with Georgia, and, having hit the Batumi coast, he emotionally quipped that the Golden Fleece sought by Jason was for him a symbol of his dedication to Sakartvelo, and carried away not by hands but in the heart. Golden words indeed!
The then-Georgian Public TV was put in charge of hosting Severin’s international voyage mission, Georgia being one of the knees in the chart. The head of Georgia’s state television, Nugzar Popkhadze, handled the event with his usual organizational mastery; Archil Gogelia, the editor-in-chief of a popular sports edition, skillfully managed the coverage of the event from A to Z; Ilia Peradze, a journalist, athlete and himself an ‘Argonaut,’ was the heart of the entire experience; and Paata Natsvlishvili, outstanding Georgian journalist and publisher, brilliantly covered the developments thereof, having been made one of the regular Argo rowers. Only Paata could have fit comfortably into the frames of those two incredible duties!
Incidentally, Tim Severin and the members of his 1984 expedition, overwhelmed with a feeling of the sincerest camaraderie towards their Georgian fellow adventurers, returned to Georgia after 30 years to celebrate together the shared success of the Argo mission, although they had never met physically since the trip ended.
According to Natsvlishvili, the great epoch of historical voyages has come to an end, for Tim Severin is no longer with us. As true and painful as this statement might be, the name of this uniquely memorized professional voyager of the world renown will forever be carved in the minds of all those good people he met and worked with during his long and meaningful lifetime, including his Georgian fans and friends.
Tim Severin, as determined and interested as he was, built the Argo replica at Greek Island Spetses, and outlined its route based on the well-known ‘Argonautica’ by Apollonius of Rhodes. The final destination of Severin’s nautical itinerary was the shores of the ancient land of Colchis, what is today’s Georgia. Because this extraordinary trial was meant to prove the authenticity of the Voyage of the Argonauts, Severin needed to rely on certain fundamental scientific research, and his choice fell on the works of the famous Georgian archeologist Otar Lordkipanidze.
The third day of May 1984, following brief, sea-going trials in the Gulf of Argolis, Argo set sail from the Greek town of Volos. Tim Severin added 10 Greek rowers to his 10 British ones, who were substituted by 10 Turkish rowing men, and finally 10 Georgian rowers in the Turkish waters. Paata Natsvlishvili was one of those good and strong men. With Severin’s permission, he authored a book describing the daring expedition and detailing the story of the travel of the new Argonauts in Georgia.
Incidentally, the Argo crew members went to Svaneti, where they got acquainted with the ancient method of gold extraction with the help of sheep’s hide, and concluded that the myth of the Argonauts was indeed based on a real story. The news of Tim Severin’s death was taken in Georgia as the loss of one of our own esteemed men.