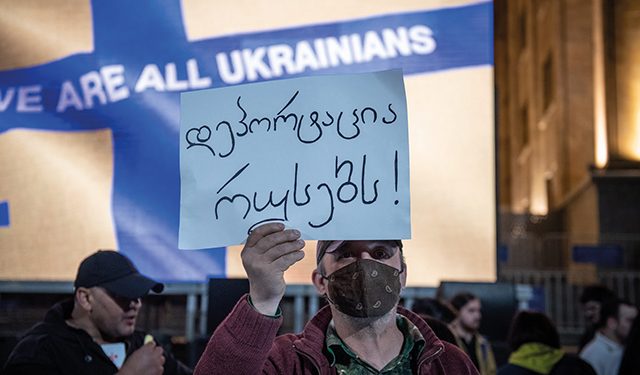 TI Georgia analyzed the existing data on trade between Georgia and Russia, tourists from Russia, remittances, foreign direct investments, and registration of Russian companies in Georgia, and concluded that Russia poses a threat to the country.

This means that compared to previous years, Georgia’s economic dependence on Russia is increasing. This growth is mainly due to the jump-like increase in remittances. Exports of goods taken separately decreased.

Among the specific findings of the study, the following was noted:

“In January-June 2022, Georgian exports to Russia decreased by 2.8% and amounted to $256 million. After the start of the war, in March-June, the export decreased by 16%, which was mainly caused by the decrease in the export of wine and non-alcoholic beverages. Traditionally, wine exports are highly dependent on the Russian market. In January-June 2022, $58 million worth of wine exported to Russia was 58% of Georgia’s total wine exports.

“In January-June 2022, imports from Russia increased by 51% and amounted to $706 million. The share of imports from Russia was 11.9% of the total imports of Georgia, which is the highest in the last 15 years. After the start of the war, the import of oil products (fuel) from Russia increased the most – by 280% (by $118 million). Electricity import increased 4 times (by $9 million). Import of coal and coke tripled, and totaled $23 million. Despite the increase in imports, Russian electricity accounts for only 3.5% of Georgia’s domestic consumption. Russia’s share in the domestic consumption of natural gas is up to 8%. Georgia’s dependence on Russian wheat and flour is still high. In January-June 2022, the share of Russian wheat and wheat flour in the total import of Georgian wheat and wheat flour was 95%.

“In April-June 2022, remittances from Russia to Georgia increased 6.5 times and amounted to $678. The main reason for such a high growth is Russian citizens moving to Georgia, who are bringing money from Russia. In the first quarter of 2022, direct foreign investments from Russia decreased by $11.2 million.

“Significantly, increased imports of Russian goods, remittances, and the establishment of companies by Russian citizens in Georgia increase the risk that Georgia will be used to circumvent sanctions imposed on Russia. Regardless of whether or not Georgia is used to circumvent sanctions by a specific sanctioned individual or company, increased economic ties mean that Russian businesses and Russian citizens in general can use Georgia to escape the economic hardship created by sanctions in Russia.”

TI Georgia recommended that the goal of the Georgian government should be to minimize economic dependence on Russia. It also advised what should be done to reduce economic dependence on Russia.
Parliament Speaker Shalva Papuashvili responded to the report by saying that the study is part of a campaign whose purpose is to create a narrative that Georgia is moving away from the West.

“They create false perceptions and then fight against them themselves. In the end, it turned out that Georgia is the least dependent on Russia economically in comparison to other countries.

“It is important for the public to see that this is a campaign, part of a hybrid war, and is directed against Georgia and the Georgian authorities. This is a part of a campaign aimed at shaking the government. The main thing is that people see this and react appropriately,” Papuashvili said.

He further noted that “It is irrelevant to make a comparison with 2020-2021 because there was a pandemic and at that time it was difficult to move around the world. As for the number [of Russians entering Georgia], nothing special is happening. This campaign is not new. In March we saw how far this [propaganda] campaign led us. It has turned into a xenophobic campaign, it has turned into the fact of someone throwing a stone at a Russian citizen in the middle of Chavchavadze. This campaign is a new source of xenophobia,” Papuashvili said.

He added that those coming from Russia are mostly young people with good incomes.

“This is the middle class, coming from Russia because they want the stability, democracy, freedom that can be found in this country,” he concluded.