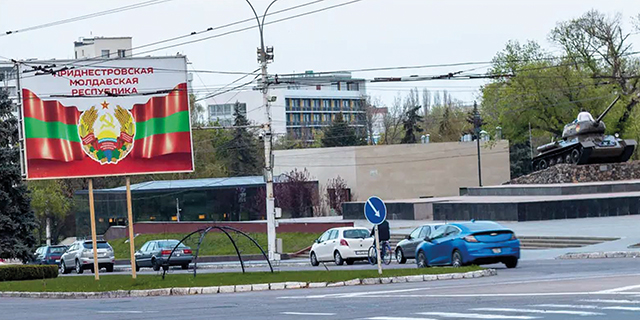 A billboard in Tiraspol, the self-proclaimed capital of Transnistria, and a tank monument recognizing World War II. Photo by Charles Davis/Insider

Since its civil war in the early 1990s, Moldova has had a similar experience to that Georgia would later have after the 2008 invasion by Russia, with occupation forces in Moldova’s Transnistria region since the 90s conducting training exercises with and equipping the de facto state’s armed forces. Additionally, they have made life difficult for the occupied territory’s residents and those living near their occupation line.

Recently, a multitude of incidents in the Russian-occupied territory of Moldova have raised fears about a potential expansion of the war in Ukraine. This began on April 22 when a senior Russian military officer stated that “control over southern Ukraine will provide another access point to Transnistria.” Only three days after this statement, armed masked men launched shoulder-fired rockets at the Ministry of State Security office building in Tiraspol, the occupied region’s capital.

The next day, two explosions occurred at the site of a radio station antenna that was relaying Russian media broadcasts. Several other bombings and a reported incident of Ukrainian troops firing across the shared border into Transnistra were alleged, but little evidence has been given by authorities. Almost immediately, Moldovan, Ukrainian, and Russian authorities began pointing fingers.

Many Russian and internal Transnistrian sources blamed Ukraine for the attacks, stating that they aim to destabilize Transnistria. Transnistria’s so-called president Vadim Krasnoselsky said in a statement on pro-Russian media that “those who plotted these attacks pursue the goal of drawing Transnistria into the conflict.” He continued pointing at Ukraine and asking Kyiv to investigate alleged “illegal movement of… fighters on Transnistria’s territory and their committing a terrorist act on our territory”.

Bombings and a reported incident of Ukrainian troops firing across the border were alleged, but little evidence has been given by authorities. Almost immediately, Moldovan, Ukrainian, and Russian authorities began pointing fingers

At the same time, Ukrainian, Moldovan, and other Western sources blamed Russia for incitement and setting up a “false flag” operation. Moldovan President Maia Sandu said it was “an attempt to escalate tensions,” and cited it as an intent to target “internal differences between various groups in Transnistria that have an interest in destabilizing the situation.” The Ukrainian aid to President Volodymyr Zelensky posted on Twitter that, “Russia wants to destabilize the Transnistrian region and hints that Moldova should expect ‘guests’.”

While there are still many opportunities for de-escalation, these incidents should serve as important learning points for other nations bordering Russia. Georgia is at the center of this lesson. Repeated acts of aggression, abductions, and even alleged cross-border covert operations culminate to paint a tense picture for Georgian national defense.

This raises a notable issue in the country that may be a vulnerability for state security. The potential for subversive actions and “false flag” operations on Georgian territory is all too real, particularly to those familiar with the underground intelligence body in the country. This type of hidden framework was something many Western intelligence officials warned about for Ukraine. In one public statement, the United States outlined this frankly.

US Pentagon spokesman John Kirby spoke about this underground tactic Russia had set up prior to the February 24, 2022 invasion. In a press release he said, “[Russia] has pre-positioned a group of operatives to conduct what we call a false-flag operation, an operation designed to look like an attack on them or Russian speaking people in Ukraine as an excuse to go in.” The United Kingdom’s Ministry of Defense made similar statements, including covert operations in Transnistria in their assessment.

While Moscow denied these claims as absurd, they did cite the abuse of ethnic Russians as a serious problem. The Kremlin has repeatedly claimed since the collapse of the Soviet Union that Russian-speaking peoples are being oppressed. Additionally, as the “motherland” of ethnic Russians, they had a “duty” to protect these people, even abroad.

This claim has been at the core of their invasion strategy and occupation, and continues to be the justification for maintaining “peacekeeping” forces on foreign territory. While Georgia has a minority of ethnic Russians, this has never dissuaded Russia. Those that do reside in Georgia proper should be made aware of this, particularly the of use of media assets and a weaponization of emotional responses to events in Ukraine.

It is imperative that Georgian authorities take this into account. A Russian operation similar to the alleged operations in Moldovan Transnistria would be an easy task. Logistics and planning can be done exceptionally close, what with a large military presence already in occupied Georgia. Additionally, due to the kind and warm nature of the Georgian people, it makes turning others into unknowing intelligence assets all too possible. Literature, media, and private entities can help the populace be aware of such a threat.