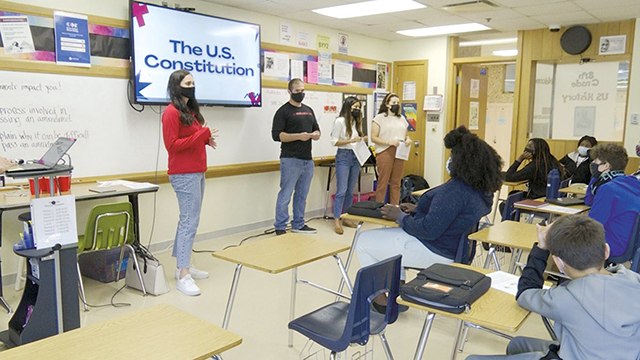 In recognition of Constitution Day, University of Nebraska College of Law students who are members of the Community Legal Education Project taught a short lesson on the Constitution to eighth-grade students in Lincoln Public Schools (2021). By Bayley Bischof

To live honestly and safely, one has to know the law of the country where one is staying. The better we know that law, the higher the chance for us to steer clear of troubles, and consequent penitentiaries, which are not the coziest or loveliest places in the world to get stuck in.

The simple truth here is that, in any of these cases, it is better to be at large than in confinement, so let’s learn the law even if we are not practicing lawyers. It is next to impossible to define every aspect of the law, but we don’t have to go that far: what we need to aim for is to get acquainted with the commonest regulations that matter in life.

If order means anything in society, then its members have to live by a set of rules that the extant national legislature establishes for this purpose. No society is capable of surviving without law, even a totalitarian one. We are simply compelled to live by the letter and the spirit of law, and as this is true, then there needs to be a fair and optimal system of laws and the education to teach our citizens what kind of behavior is compatible with the idea of abiding by the law.

Because law as an actual legal reflection of our society, we can judge the behavior of its members by the quality, practicability and fairness of the legal system functional in this country. For instance, the average local motorist in Georgia is loath to go by the traffic regulations, which is also a law like any other, being the subject of the most stringent fulfillment, but it is in our national character to break the traffic regulations if we have a chance to get away with the breach. This means that the law in this respect is not effective enough, and the supposedly ensuing punishment is not strict enough to make one afraid of breaking the law, and this means that citizens are not afraid enough of the state. If they were, they wouldn’t dare break a law so easily, relying as they do on impunity or an overly tolerable level of punishment.

If order means anything in society, then its members have to live by a set of rules that the extant national legislature establishes for this purpose. No society is capable of surviving without law, even a totalitarian one

There is another explanation for the fact of a commonplace breakage of the law, and that is not just our indifference, but ignorance. Most of us are not well enough versed in the legal system and the necessary details of the functioning legislation. If we were, then the prison population in Georgia would be far less than it actually is. It is not only lawyers and judges that need to be trained in comprehending and enforcing the law, but the average citizen, too, showing themselves ready to respect the law but needing help to understand it better. We all owe to our state and to ourselves too, for that matter, the owning of some knowledge of the basics of law enforcement and the legal framework within which we are born, grow up, live our lives and die.

There are many ways to enhance the legal qualification of our citizens: school and college curriculums, special radio and television programs, free public courses, planned encounters with specialists of the field, etc

By trying to do this, we make an attempt to nurture the good citizenry of our country, who have basic rights and obligations guaranteed and protected by the Constitution of Georgia and by the various rules and regulations that are functional today. Here, I would love to ask a simple question: how many of us, citizens of Georgia, have read (simply read!) the Constitution from A to Z, and have reasoned over its content, saying nothing about all other laws that are compatible with the main law of the land? Probably not many! If the aim is to get the full protection of the laws of Georgia, being a citizen of this country might not be enough – we should also know what those laws are all about, because they make the principle sources of our personal human freedoms and rights, as well as the obligations before the state and fellow citizens.

There are many ways to enhance the legal qualification of our citizens: school and college curriculums, special radio and television programs, free public courses, planned encounters with specialists of the field, etc. What remains is the endeavor to improve ourselves and to recognize that the citizenship of a country means much more than blindly making use of our rights and forgetting about our obligations. Ignorance of the law leads to that sadly familiar feeling of dissatisfaction with our quality of life that haunts us, no matter how grown up or how civilized we become, so- Live and learn, as the saying goes!