The History of Georgian Ceramics: One of Georgia’s Oldest Traditions Still Very Much Alive Today 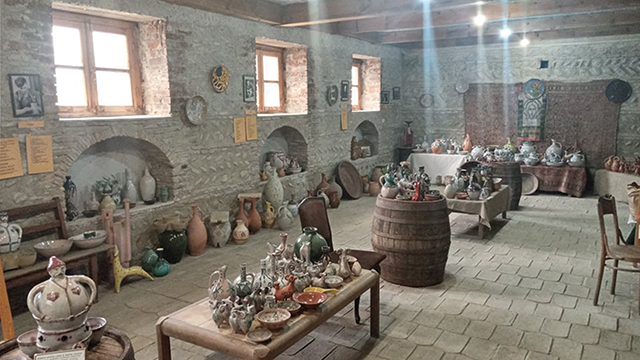 The Tatulashvili Ceramics Studio and Museum in Gori

Like many other ancient nations, ceramics are a big part of both the past and present of Georgian culture. There have been hardly any archaeological excavations on Georgian land that did not unearth centuries-old pottery of different types of craftsmanship. From the cultures of Kura-Araxes and Trialeti, the Ancient era to the Medieval period, ceramic artefacts show that pottery was a way for Georgian ancestors to portray and accessorise their culture, religion, and social life.

It is well documented that Georgia has ancient roots. The first humans, Homo Erectus Georgicus, that is, found in Georgia, date back 1.8 million years. The history of Georgian ceramics starts early on too, in the Neolithic period. It seems Georgians at this time had already mastered relief-making on top of ceramics: A clay wine vessel, considered to be the oldest wine vessel in the world, found in the region of Kvemo Kartli, has details of grapevines, signalling that winemaking had become or was becoming a big part of the local culture.

By the 4th – 3rd millennia, religious beliefs, as well as a fascination with astrology, were adopted into early Georgian cultures, demonstrated by the ceramics of this period which included some religious and astral symbols. The craftsmen had moved on to high-quality, black-glossy pottery, perfected with geometric ornaments.

Influenced by connections with Western Asia, the 2nd millennium’s Trialeti culture shows the craftsmanship of not only pottery, but also metallurgy. Found in the Kurgan burial sites, vessels made from silver and gold show the excellent detail-oriented approach of the craftsmen. The designs on some cups attest to the multifunctional meaning of the grapevines, as by then the plant had become a part of religious symbolism, and vessels themselves were integral to religious rituals.

The symbolism of the grapevine only got more colorful over time. By the early Iron Age, ancient Georgians had already established the culture of the ‘Tamada’ (a Georgian toastmaster), as shown on a little bronze sculpture of a man from Vani, which, if you look at it closely enough, seems very modern, from the 8th-6th century BC. A ram-shaped wine vessel made from clay also dates back to this period, uniting the cultures of wine and ram with Georgian tradition, also giving it a touch of Greek mythology. Crafted from bronze, horn-like drinking vessels, known in modern-day Georgia as Kantsi, also originate from this period.

Georgian pottery from the Antiquity period further establishes the grapevine and wine as major symbols of the nation’s culture and aspirations, as the craftsmen seemed to be under Greek and Roman influences, especially in the Western part of Georgia. This era sees the emergence of farm culture depicted on ceramic and metallurgic vessels: bulls, horses, and again, rams.

Moving on to the AD period, and as wine culture grew stronger in the country, craftsmen started shaping vessels and cups in different ways. Shortly after Christianity became a part of Georgian culture, the medieval craftsmen started their own renaissance period early, going back to the roots of local ceramics. Just as in the early Bronze Age, popular features used on jars and dishes were birds and animals. Now more colorful than ever in its sense and style, medieval Georgian pottery can easily be connected to that of the Near East and general Caucasus region.

The 13th century Mongol invasions forced the country to take a few steps back in the production of crafts. Pottery-making would not resume until the 18th century, at which time it became more of a part of folk culture, a sort of everyday crockery. In the 20th century, up to 50 potteries opened up around the country, in an effort to keep up with the thousands of years of tradition. And this is ongoing today, with every Georgian region featuring at least one pottery studio.

In addition to accessorizing, ceramics in Georgia were made throughout history to function as practical vessels for holding water, milk, and wine, to use as kitchen utensils, to store grain, and for use in construction.

The Georgians have now of course switched to more ‘modern’ solutions – milk is kept in cartons, water is kept in bottles; but much of Georgian wine remains in earthenware vessels of qvevri. Before sitting down to write this piece, I meant to write separately about the history of Georgian ceramics and only connect it to the wine-making culture in the last paragraph. However, the more I researched, the more evident it became that this history is twofold: like most Georgian things, ceramics, too, are intertwined with the wine culture of the country. It should be so; indeed, the oldest wine vessel in the world found in Kvemo Kartli, dated back 8,000 years, revealed the earliest precedent of grape-based wine, making Georgia the motherland of grape winemaking.

Originally published in Made in Georgia magazine, a UK-based journal promoting Georgia and its investment potential.

By Nini Dakhundaridze for Made in Georgia