The Genetic Bond between Lelo & Rugby 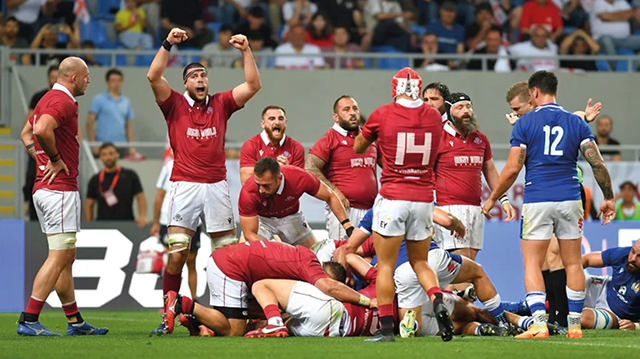 Georgia makes history with victory over Italy in Batumi. Photo by Levan Verdzeuli/Federugby via Getty Images

It was a huge pleasure to be one of those overexcited eyewitnesses of that outstanding triumph of Georgian rugby in Batumi on July 10. The fact the Georgian team won against the just as strong and famous Italians (28 to 19), is an internationally known fact, and I feel no need to go into the details, but the level of emotionality of that stupendous sporting event needs to be fixated in the public mind for good: the stentorian rooting chants, breath-holding silence in between, postgame hugs and kisses, tears in the eyes, ubiquitous smiles, spontaneous collective congrats, and of course the proud victory lap of the celebrating athletes around the field.

Not one fan wanted to leave the place after the game, as if wanting to make sure that the victory was ours indeed; the entire arena remaining under the impression of those potent scrums between the fighting athletes, relentlessly trying to overpower each other. It was a real celebration of the Borjgali, the symbol of the sun that is regarded as the sign of the Georgian national identity. The emotions at the new, pretty and comfortable Batumi stadium were so overwhelming that the imaginable loss of the game by Georgians could have been a genuine national tragedy.

Thank heavens the happy end did not evade the lucky nation, though, of course, it was not only a matter of luck! When those powerfully built boys dashed out onto the field like trained bulls to warm up, the feeling was that there was something genetic in the whole thing. And indeed, the game experts and researchers are eager to corroborate the previously expressed presumptions about the natural bond between Rugby and Lelo, insisting that the latter is the ancestor of the former. Speaking generally, all sorts of ballgames have a long history, a ball having been one of the most popular details of the ancient sporting life.

Lelo has been played in this country since ancient times, though today its supporters are seen in just one location of West Georgia, in Shukhuti of the Lanchkhuti region. The contesting teams in this rough, manly game were historically made up of tens, maybe hundreds, of participants. The fight should take place on terrain crossed by a river and other natural obstacles, so as to make those pursuing the ball more entertaining to watch. Per the rules, two groups of males compete from two different parishes, never defining the number, but it is a matter of pride that no strapping man, be he young or old, miss the chance to get in there. A very heavy ball of up to 18 kilos, stuffed with sand and sawdust, is placed in the middle of the battlefield, and the final aim is to get it to a definite place, say the opponent’s side of the field, the boundary of the opponent’s settlement, the base of the hill, or to any other special spot chosen before the game. While crossing the battlefield, the players have to overcome obstacles like water, elevations, marshes, woods and what not. It is a game of brave folks, and was sometimes played even on horseback. Interestingly, it is believed that the winning side guarantees a season of plenty for their fellow villagers.

Today, the traditional game of Leloburti is played in Shukhuti on Easter Sundays. Last year, they skipped the event because of the pandemic, but were enthusiastically ready for the following season. Interestingly, and amazingly, the exact same ballgame, the Royal Shrovetide Football (“hug-ball”), a medieval annual football game, is played on Shrove Tuesday and Ash Wednesday in the town of Ashbourne in Derbyshire, England. History has it that the Shrovetide ball games have been played in England since the 12th century. What astounding coincidence!

And this is not the end of the story: a group of Georgian cinematographically-minded gentlemen have decided to reflect the Lelo saga and its significance in an incipient documentary, not yet precisely titled, but meant to be out shortly in its two linguistic versions, Georgian and English. Interesting, isn’t it? The screenwriters are two famous Iraklis – Tripolski and Papava, or Papava and Tripolski. I am sure neither would mind the order of reference. Davit Goguadze is the producer of the future picture, as well as its editor and the second camera, and Levan Pataraia is the chief photographer. Your obedient servant and the author of this piece happens to be the narrator of the film, with occasional flashes on the screen.

Good luck to this wonderful bunch of Ethnofilm Studio professionals, who will soon tell the world another good story of ballgames, marking the astonishing parallel between the Lanchkhuti and Ashbourne folk sporting events.