The Future of Supply Chains 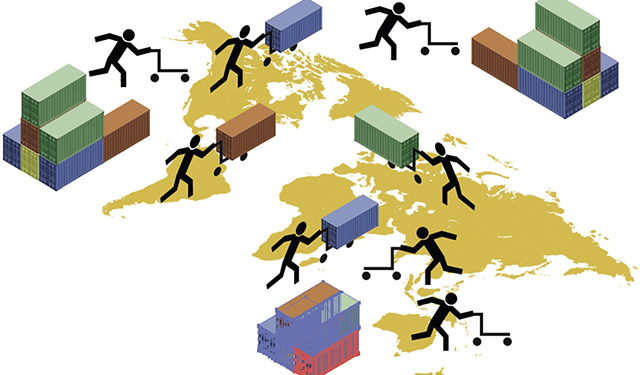 In this difficult past year, the West has come to see how vulnerable it is to supply chains that are largely focused around China

The COVID-19 pandemic ramped up discussion about changing global supply chains, although this notion was present before the epidemic, when tensions with China were growing on a number of fronts: trade; Beijing’s geopolitical ambitions related to its flagship project the “Belt and Road Initiative” (BRI); issues related to Hong Kong; and ethnic problems in Xinjiang and Tibet. The trend is growing in intensity as the West’s disagreements with Beijing approach the insurmountable.

In this difficult past year, the West has come to see how vulnerable it is to supply chains that are largely focused around China. To prepare for future disruptions, it is expedient for the West to evaluate the possibility of reorienting supply chains of major products toward countries that are geopolitically close.

An interesting development in the West’s rhetoric over the course of Beijing’s handling of the pandemic is its near-complete disillusionment with China’s government system. This made calls for reorienting supply chains to democratic countries more insistent. As has become clear, at least as far as the rhetoric suggests, democracy now matters as much as or even more than access to a cheap workforce.

The West would like to redirect production of four main products- semiconductors, automobiles, pharmaceuticals, and telecommunications, away from China.

Arguably the most attractive countries that might benefit from this reorientation of supply chains are in the Indo-Pacific. Home to over half the world’s population and some of its fastest-growing economies, this region is a determining factor in shifting global geopolitics.

India of course comes to mind, but a number of other countries, such as Vietnam, Indonesia, Malaysia, and others, are good candidates. They have relatively experienced workforces, and their geopolitical aims mostly align with Western ambitions in the Indo-Pacific.

Two things help define supply chains. One is availability and the second is price. In both areas, the Indo-Pacific region stands out.

Accomplishing this shift would require efforts from both the West and governments in the Indo-Pacific region. Perhaps fora should be assembled to lay out a common strategy for the redirection of supplies. This will be difficult, as pressure from China will mount. It will require time and consistency from the potential players, as a realignment of interests involves building market capacities and making improvements in macroeconomic spheres.

But the geopolitical trends and intentions of the region’s states are promising. For instance, on September 1, 2020, Australia, India, and Japan made a commitment to build resilient supply chains in the region as a result of the pandemic. Not surprisingly, these countries are also working on a closer geopolitical association, the QUAD, to counter China’s moves.

The changing dynamics around supply chains indicate that in a merging of business and cold-blooded geopolitics, private industry and governments both have incentives to relocate

Another area with an inexpensive and experienced workforce is the region containing Ukraine, Moldova, Belarus, and the South Caucasus. Distant from China, and thus from its direct geopolitical influence, and close to the West, these countries boast a total of approximately 70 million people. Maritime as well as relatively well-developed rail and road connections to Europe could facilitate the redirection of supply chains. Moreover, the region is closely aligned with Western standards, both geopolitically and bureaucratically (except for Belarus and, to a degree, Azerbaijan).

A third region could be Africa. It has a huge and inexpensive workforce, but it lacks expertise, and the countries on the continent do not have the necessary railroad and port infrastructure. Moreover, Africa is notoriously unstable and vulnerable to outside interference.

It should be emphasized that the impetus to make this shift was not only China’s recent behavior, but the overall inability of modern supply chains to withstand exogenous pressure (in this case the pandemic). Many of today’s world supply chains were developed during the globalization period of the 1980s-2000s, a time of falling trade barriers and transportation costs. However, as noted, they started to be questioned even before COVID-19. Geopolitical, technological, and economic forces had begun to redefine the very notion of the concept of globalization. Tariff wars and rising protectionism around the globe are just a couple of examples.

The changing dynamics around supply chains indicate that in a merging of business and cold-blooded geopolitics, private industry and governments both have incentives to relocate. Exactly what a resilient and secure post-pandemic supply chain would look like depends on specificities of industrial sector, location, manufacturing network, and many other factors.

The growing calls for supply line relocation are not about rapid de-globalization, as many believe. Trade in goods might see pressure and even crises of varying sorts, but the bigger picture is that beyond physical goods and commodities, services, ideas, data, and information are exchanged in a global commercial market. Globalization will continue, the world will remain interconnected, and crises in one location will influence far-flung territories. It is just a question of how far from China major industries will move. Trends indicate the process will accelerate and many will follow Japan’s decision to withdraw major companies from the Chinese mainland.