The Change Triggered by the War 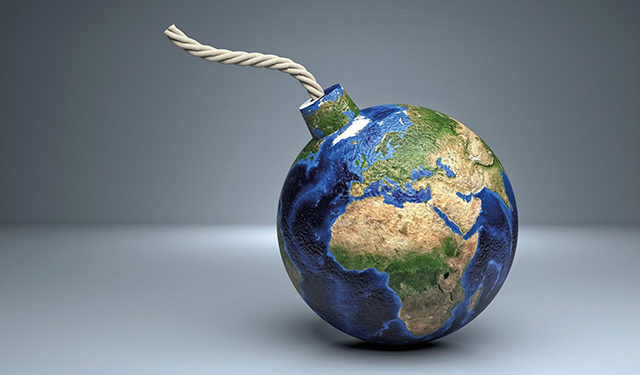 Not exactly unexpected, the extent to which the Russian-Ukrainian war has spilled over its edges, being a “win or bust” on the part of both sides. The question is no longer who wins the war, but what happens to the planet as a result, notwithstanding the fact that this is not a world war in the physical sense, but by the level of moral involvement, it does happen to be a global military affair. Perhaps it will indeed be given the appellation WWIII, and there will be no exaggeration in such a nomenclature, because a much higher number of countries are engaged in the process, this way or that, than in any other warfare in history. The majority of analysts are refraining from making any substantial prognosis, however, cautious that a stray prediction might have a negative effect on their reputation as experts.

Now that the mishaps of previous world wars are in the past, hardly anyone wants to imagine that the same misfortune will overwhelm Mankind once again. Many would say it looks like a war movie, with familiar images of savaged human lives that will never fade from our memory. But this is no source of solace, of course, in the current situation we humans find ourselves in, seemingly out of the blue.

Most political scientists around the world speak in morose and pessimistic tones when they judge Russia’s current behavior and its prospective place among the nations of the world, saying that Russia will lose even if it wins this war, in depleting resources, worldwide anger, criminality of action, Putin’s doubting entourage, Ukrainian resistance, shrinkage of energy resource clientele, economic drawback, possible financial default, pacifistic mood of millions of Russians, and the detrimental overall impression that Russia makes on the rest of the world, losing friends one after another and winning enemies in droves.

Although this might all be true, the Russian state and its military machine are still hanging in there, ceaselessly ready for another assault on those tireless Ukrainian fighters, keeping the world in diabolic suspense and fearful expectation. Yet, we seldom hear any comments from western experts as to whether Europe and the United States did their affordable best to prevent this war in Europe, having treated with flagrant insouciance the Russian entreaty to refrain from augmenting NATO membership at the expense of Russia’s national security, concluding that Russia will end this war with the opposite results it expected to achieve before its intrusion into Ukraine, and predicting that NATO and the European Union will come out from the conflict not weakened and splintered, but better armed and more tightly united, covering even wider borders of Russia than they had hoped to covet before the war.

The world has been threatened many times in the past, but the world’s leaders always steered away from the dilemma of another world war. Not this time, though! Why? What happened? Why is this situation any different from the ones we faced before? These questions are still waiting for relevant and scientifically corroborated responses, although it might be too early yet to expect helpful answers.

Following the raucous disintegration of the ill-fated USSR, the West made it a rule to let Russia feel like a second-rate state, and who knows how fair it was or how well it served the world’s best interests of peaceful development. Not that this could be the reason for the current war, but there might still be a vestige of truth in this unpopular idea.

What I know for sure, thinking at the grassroots level, is that friendship, understanding and mutually beneficial cooperation might work much more fruitfully than derision, contradiction and animosity. I believe things could have been much better today on the planet, had useful coexistence been honored between East and West, and North and South. Instead, all of us are the victims of the controversy and confrontation which has taken over the world, all of us sailing in the same rocking boat of losers.