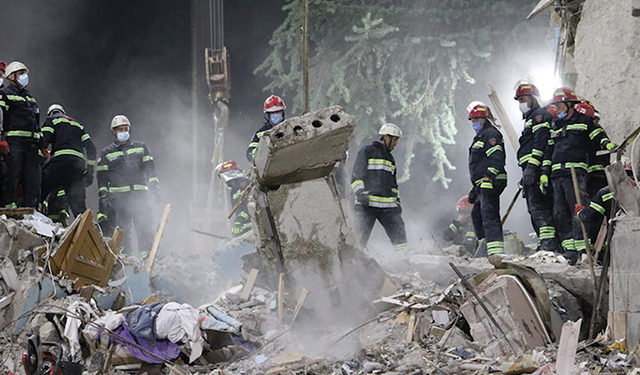 On October 8, Georgia was shaken by a tragedy that occurred in the seaside city of Batumi in Adjara, a place always associated with happy times and fun memories: a 5-storey block of flats collapsed on 26 May Street, claiming the lives of nine residents, including three minors. Four members died from one family: a mother, her two children, and her brother-in-law.

Up to 400 firefighters and rescuers from the Ministry of Internal Affairs, along with representatives of various police units, worked non-stop for 29 hours during the search-and-rescue operation.
Rescuers managed to save two children from the ruins, and their condition is stable.

The collapse was caused by repair works being carried out by a flat owner on the first floor, during which workers damaged the retaining wall of the building.

“As a result of investigative and operative activities carried out by the Adjara Police Department of the Ministry of Internal Affairs, three persons were detained in the course of investigating the collapse of the residential building in Batumi: the owner of the first floor apartment Z.B. (DoB 1975), Kh.S. (DoB 1962), and G.S. (DoB 1992),” the Ministry reported in a statement.

“The committed crime envisages from 2 to 10 years of imprisonment.

“The investigation established that Z.B., the owner of an apartment on the first floor of a residential building located on 26 May Street in Batumi, had hired Kh.S. and G.S. for construction-renovation works in the apartment. Under his direction and in gross violation of safety rules, construction and renovation works were carried out in the apartment which led to the collapse of one of the entrances of the building on October 8 of the current year.

“An investigation is underway under Article 240, Part II and Article 187, Part III of the Criminal Code of Georgia on the facts of a breach of safety regulations during construction or other works, and damage or destruction of property belonging to others, which results in loss of human life and grave consequences.”
Reportedly, Zaur Budatov did apply to the Public Registry for a permit to conduct his planned repair works, but he started the works prior to receiving said permit. Budatov manages a Batumi casino and had bought the flat in September.

According to local media outlet Batumelebi, the national public registry agency discovered a problem in Budatov’s paperwork on October 8, the day the building collapsed, and stopped the permit process, citing a lack of sufficient documents, among them the lack of a blueprint for the basement and first floor.

By the time permission was denied, the building had already collapsed. 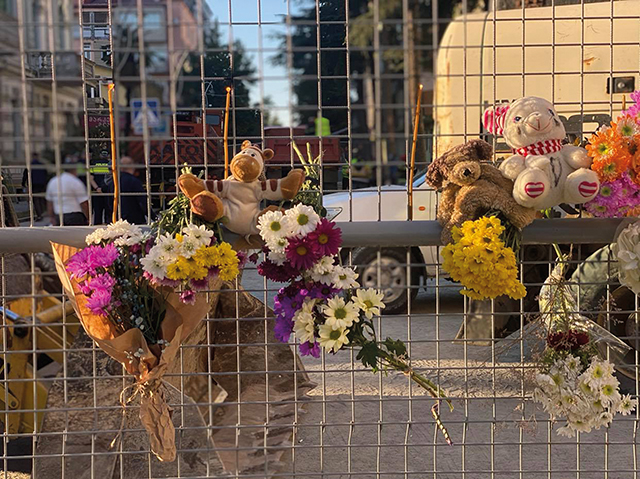 A Country Mourns
To express their sorrow at the tragic loss of human life, citizens lit candles and brought flowers and toys to the fences erected in front of the ruins of the building.

Due to the tragedy in Batumi, the event planned to celebrate Tbilisoba (the Day of Tbilisi) this month was canceled, and the amount allocated for the festivities is to be transferred to a fund set up for the families of the victims.

“A tragedy that has united the whole country is a mutual pain for everyone. Tbilisi is a city that has always shown an example of support in difficult times,” Tbilisi Mayor Kakha Kaladze noted.

“Even today, in these difficult times, Tbilisi stands by Batumi. Our team has decided that the event which was supposed to be held in a TV format to celebrate Tbilisoba will be canceled. The allocated money will be transferred to the Fund for Assistance to the Families of the Victims of the Tragedy in Batumi,” he said.
Monday October 11, was declared a Day of Mourning in Georgia, and national flags were lowered on buildings across the country.

“I express my deep sorrow over the tragedy in Batumi. My condolences go out to the family members and relatives of the victims,” Prime Minister Irakli Garibashvili said. “Together with them, the whole of Georgia mourns this horrible tragedy. The state will provide all relevant assistance to the victims of the incident.

“All persons whose guilt is revealed will be punished with the full force of the law. The Ministry of Internal Affairs has already detained three people and the investigation is ongoing,” he added.

Unfortunately, such illegal constructions and repair works are a common problem in Batumi, Tbilisi and other locations throughout Georgia. Further, buildings designed and fast-built in Soviet times to last just 15-25 years still house thousands. The unnecessary deaths in Batumi last week have once again shone a spotlight on Georgia’s construction, maintenance and inspection failings. If neither citizens nor the state start to pay more attention to this issue, future tragedies will be unavoidable.