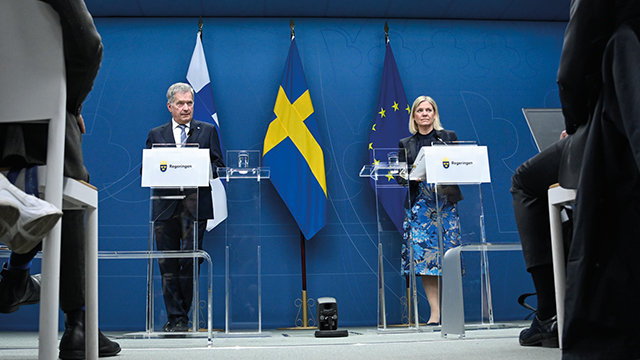 It’s all Putin’s fault… We had a balance, and it was Putin who decided to change that balance, says Pekka Toveri, a retired Finnish major general who served as Intelligence Chief of the General Staff of the Defense Forces from 2019 to 2020, when talking to RFE/RL about Finland’s NATO application and the possible Russian blowback.

Finland’s pro-NATO President Sauli Niinisto this week traveled to Sweden and witnessed Swedish Foreign Minister Ann Linde’s televised signing of the country’s official application, which she said would go to NATO Secretary-General Jens Stoltenberg alongside a similar paper from Finland.

The NATO summit will be held in Madrid on June 28-30. NATO officials have indicated that the accession protocols for Finland and Sweden could be signed at that time.

Yet, on Tuesday, Turkey’s President Recep Tayyip Erdogan said he will not be supporting their bids, as he is “angered by their willingness to host Kurdish militants.”

Without the support of all NATO members, Sweden and Finland cannot join the military alliance.

The usual ratification process takes at least a year, if not years. But in this case?
It’s difficult to say. I don’t believe it will take a year because the United States is putting a lot of pressure and trying to coerce the members to handle this as fast as possible. I would say it should be expected by the end of the year, but it will still take at least half a year.

There might be possible stumbling blocks along the way – Turkey, Hungary, even the Croatian President seems to be unwilling to commit. Can the US persuade them?
The Croatian President, as I understand, has a “special” relationship with the Russians, but, thankfully, the Croatian government has a totally different view and the president is not the one who makes that call. Turkey might be a more interesting challenge. There’s been discussion between the Finnish political leadership and Turkey already about this, and I think what Erdogan wants to do now is what we in Finland call “milking the cow”: he wants to see what he can get out of this from the US or NATO before agreeing. I don’t think Hungary is such a big problem – you have to remember that the biggest NATO countries, barring the UK, are also biggest EU countries, and Hungary is getting a lot of money from the EU. So I don’t think that President Orban is willing to risk that and gain the hatred of both NATO and the EU by making things difficult for Finland.

It being a milestone event, how does it change the security paradigm vis a vis Russia?
From Russia’s point of view, it’s a big hit because now the Baltic Sea will become a lake of NATO. Russia will retain its couple 100 kilometers of shoreline there, but it will be 90% surrounded by NATO countries. So Russia’s ability to run military operations there will be practically zero.

Finnish President Sauli Niinisto famously said if the Russians aren’t pleased, they should look in the mirror. To what extent is President Putin to blame for this outcome?
It’s all his fault. For years, Russia has said Finland shouldn’t join NATO, but our answer was that it’s Finland’s decision, which would be made based on Finland’s needs. But then, in December, President Putin said that Finland cannot join NATO, that there would be consequences. That was a direct threat, trying to force Finland’s hand. And we saw after the aggression in Ukraine that Putin is blatantly willing to use force against even a fellow Slavic nation. That’s what our President means when he says: “You should look in the mirror; it’s your fault, not our fault”. We had a balance in this area, and it was Putin who decided to change that balance.

The Kremlin is threatening “military – political consequences.” Is that an empty threat? What can Russia do?
I’d say that [Russia’s] possibilities are somewhat limited. Traditionally, they relied on political, economic and military pressure. There’s no significant pro-Russian political power left anymore, so they don’t have this leverage. The economic impact is very small, because even before war, our trade with Russia was something like 5% of the total trade in Finland, and now it’s half of that and still going down. So there’s not much they can stop. They could of course stop sending us gas. But Russian energy is a very small part of Finnish energy consumption. It might hurt for a couple of weeks while southern areas of industry replace the Russian gas, but it’s not going cripple our economy in any way. When it comes to military power – Russia’s forces are tied up in Ukraine, they don’t have enough [to do anything]. Barring nuclear weapons, in conventional terms, they don’t have anything with which they could seriously threaten Finland’s independence and existence with in such a way that they could force our hand, especially now that the UK and some other NATO countries are giving us assurance of military support if we are attacked.

Even as a NATO member, responsibility to defend Finland lies 99% on Finns, we can’t lower our guard

Putin says he won’t object to membership per se, it’s NATO infrastructure he’s worried about. What NATO military infrastructure do you expect to be introduced in Finland?
That is a difficult question to answer. It would totally depend on the situation. First of all, I doubt there would be separate NATO bases in Finland. If there were Air Force or Navy units arriving, they would probably use existing Finnish bases that could maybe be enlarged a bit if needed. The same goes to Army units. Instead of major units, I could see perhaps a need for certain capabilities that we don´t have ourselves just now, like long distance Air Defence/Ballistic Missile Defense units etc.

Overall, I don´t think that there would be a need to permanently base NATO units in Finland, but to improve our capability to receive temporary reinforcement if needed.

The security pact with the UK sees PM Johnson offering to “provide support” if the two Nordic nations are attacked. How much support are we talking about and in what manner?
It’s not a security guarantee. It’s not a government to government agreement ratified by Parliament. It’s an assurance, meaning that, that if we were attacked, we could have support which would be decided between Finland and the UK. The PM would probably have to go to Parliament, ask them to give him the powers to provide such support. So it’s a bit vague, yes, and depends on the situation, what Russia would do, what’s available and needed.

Finland shares a 1,340-kilometer land border with Russia. That’s not a cause of concern if they are up to mischief?
[laughs] The thing is that 90% of that border is wilderness, its forest terrain, no road, no network, no anything. Attacking with a land force across the border is nearly impossible. They could use the roads down south but they don’t have any land force to do that, 80 % of their combat-capable land force is tied up in Ukraine. The outposts near the Finnish border have been emptied. They could try their luck with an air attack, but our air defenses and Air force is in pretty good shape- especially considering the fact that we’ve seen the “quality” of the Russian Air Force in Ukraine, it’s really not too impressive. So it would be a very big risk for Russia to try something like that. I’d say that the most vulnerable thing is communication networks, because Finland is logistically an island, almost 90% of our trade goes via Western sea lines of communications, and there if you go down south, that is where the major Baltic Sea forces that Russia has are, at Kaliningrad, close to Poland. But again, that’s where the assurances given by some of the NATO countries are important, because NATO has overwhelming maritime force in the Baltic Sea. So I think they could help there, if Russia were to decide to do something like that.

Finland’s defense forces are already interoperable with NATO, but still – does it spell any changes for Finland’s conscription system?
No, I don’t expect any changes. You know, we are a small country with a big defense capability. We’ve seen in Finland that the most important part of our defenses is building willingness to defend the country among the population – that comes through general conscription, because that way, every family more or less is tied up in the defense. And we saw that when the Cold War ended, many countries left the conscription system – in those countries, the population’s willingness to defend their country went down drastically. We still need the conscription system, for sure – even as a NATO member, responsibility to defend Finland lies 99% on Finns, we can’t lower our guard.

Should we expect growing numbers in the professional standing army?
Well, the Finnish government has already allocated some more money for defense, and part of that money will be used to increase the amount of professional standing troops, but it’s not a big change. We currently have 12,500 professionals in the defense forces, and we are talking about increasing it by a couple of hundred on the longer term, +1000 max. The only standing professional force for the Finnish army at the moment is special operation units. I don’t believe that we would create any professional tank companies, for example.