The Age of Counter-Enlightenment 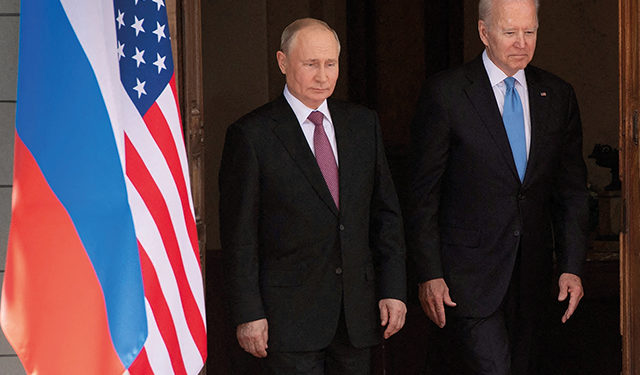 Putin and Biden: Biden’s insistence on upholding democratic and liberal ideals suggests the US is willing to battle illiberalism. By Saul Loeb/Pool via REUTERS

We live in the age of counter-Enlightenment. What seemed like a collection of dispersed autocratic and simply illiberal states, has now coalesced into a fully blown ideological movement premised on not only resisting liberal internationalism on an ad hoc basis, but exporting authoritarian models of governance.

Illiberalism’s flag-bearers in China and Russia have also shown they can harness modernity. What was deemed an asset peculiar to the West, because progress was considered a direct result of liberal norms and vice versa, is now being fitfully mastered by its enemies.

Yet, the bad news comes with a good-news rider. If the United States wants to maintain global influence, it cannot simply seek to maintain the old world order. The appearance of serious rivals with a hostile ideology will stiffen America’s resolve. This happened in the Second World War and in the Cold War. For the past decade or more, this ideological motivation has been lacking because China’s competition was mostly still viewed as fitting within the framework of the liberal world order. China, the West wrongly believed, could be lured into better behavior by the self-evident benefits of cooperation.

Take China and Russia. Westerners expected poor economic conditions to liberalize or even bring down those regimes, but the reality is quite different. China gathered strength after the 2008 financial crisis and raised its profile through vaccine diplomacy during the Covid-19 pandemic. Russia, despite suffering from extensive sanctions, is growing more assertive in the South Caucasus, Black Sea and parts of the Middle East. Even in Iran’s case, its most active foreign involvement coincided with the Western sanctions.
Illiberalism has been wrongly described as unstable and as a transitory stage in the evolution towards the liberal-democratic model. But armed with the trappings of modern technology, it is resilient and resourceful, and is a much longer-term challenge than the crude communism of the past. Failure to deliver on its promises ultimately killed the communist dream, but failure to deliver in quasi-capitalist illiberal states will not bring down the order as quickly as some would think.

The West should support the fragile states of Georgia, Ukraine, Moldova and Armenia because there is still some hope they can take a better path

China and Russia’s example makes illiberalism fashionable among the struggling states of Europe and Asia. In Georgia, Far-Right movements repudiate the tenets of liberalism and advocate the reversal of the entire political system, and, what is more important, seek closer ties with Russia. Their arguments are more nuanced though. Fearing a backlash, they explain the need to work with Russia as a geopolitical necessity.

All these problems are abetted by Russia’s military presence on their sovereign territory and by troubled economies which create space for China’s powerful economy. The governments in these once Soviet states are manifesting the ability to appropriate the liberal concepts on state and economy to advance their illiberal agenda.

The West has to look at this challenge from a wider historical perspective. Hopes for the eventual abandonment of the illiberal governing model are not as self-fulfilling. Bolstering the liberal order by strengthening rules-based policies is one approach. Another is to show that liberalism is more attuned to the economic and governance progress. The means to shore up state institutions in those fragile countries should be sought.

The West should support the fragile states of Georgia, Ukraine, Moldova and Armenia because there is still some hope they can take a better path. Recently, Georgia’s politicians resolved a major political crisis by re-entering the legislature after months of boycotts. In Armenia, the decision to call snap parliamentary elections lowered political tensions. Illiberalism in the region, all Armenia’s and Georgia’s neighbors are less-than-liberal states, could easily engulf these tiny islands of aspiring democracy.

Illiberalism is essentially a counter-Enlightenment and is seen by autocrats as a return to normalcy in human and state relations. They hail the primacy of state and strongman rule or clique rule and create something eerily reminiscent of illiberal governments between the two world wars, when democracy could not survive pressures from within and without.

Biden’s insistence on upholding democratic and liberal ideals suggests the US is willing to battle illiberalism. Whichever model prevails will ultimately define the world we live in and will be decisive for smaller states bordering illiberal powers. Military power matters, but the battle for hearts and minds is just as important.