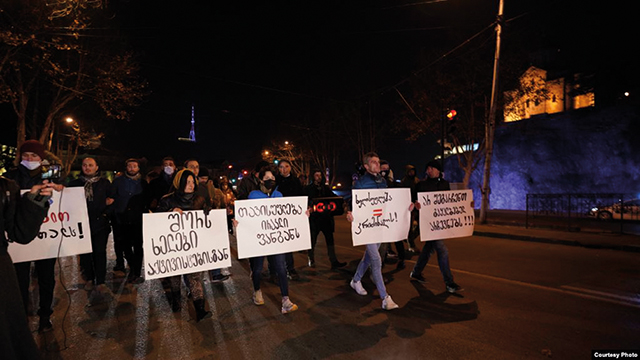 This Sunday saw crowds of civilians protesting the government’s extension of COVID restrictions in the center of Tbilisi. Prior to that, on January 22, the government’s Coordination Council announced new decisions on the COVID restrictions, according to which public transportation, along with schools, will remain closed until March 1 in Tbilisi, Kutaisi, and Rustavi. This, perhaps not all that unexpectedly, angered many in the capital and beyond. On Sunday afternoon, in front of the Chancellery, civilians organized a protest, demanding the reopening of public transportation. The demonstration organizers, in the description of the Facebook event, said it was a “protest against the government.” Their other demands were to reduce the curfew, and to open schools, kindergartens, mountain resorts, and theaters.
“Nobody is raising their voice, and [the government’s] behavior has become uncontrollable,” reads the description.
Giorgi Vashadze, member of the ‘Strategy: David The Builder’ party, joined the rally to show his overall frustration with the still-imposed COVID “lockdown.” According to him, the government is imposing too many unreasonable restrictions on the country.
“There are many senseless restrictions, and I’m breaking one of these restrictions today. I have test results in my hand, according to which I am healthy, and yet I have to be locked up due to a reckless decision of the government,” he said during the rally.
He also talked about the CPR test, which was the reason he was supposed to be at home.
“I was in America, where I took a PCR test, and there I had no problem moving around. I arrived in Georgia and was told to go into a 12-day quarantine, even though I called the hotline, said I did the test, I’m healthy, told them I was willing to do it again, seven times even, if you just let me out. They said no; told me to stay home. So, I’m demonstratively violating the order,” said the politician, adding later that “these are senseless, irrational restrictions, and there are many such meaningless restrictions.”
Although protesting, Vashadze did not seem to be in favor of a total reopening.
“You cannot forget businesses, the economy, leave citizens unemployed and hungry, and sit contentedly in a chair, saying ‘this is the best option.’ Therefore, I am demonstratively violating one of the irregular rules that they have set, the precedent of which is very few in the world,” Vashadze said.
The peaceful protest on January 24 was attended by leaders of several political parties, as well as representatives of business associations, mountain sports, arts, and more.
The same day, separately, an initiative group of parents held a rally in Mziuri Park, Tbilisi, where they demanded a clear plan from the authorities on when and how they plan to open schools and kindergartens.
“Once again, we felt cheated and abandoned because we really could find no another way,” one of the organizers, Nino Robakidze, told Radio Tavisupleba.
“We are interested in whether teachers, resource officers, and doctors have been trained [ahead of the March 1 opening]. Is the infrastructure ready? Children with special needs are a separate topic. These children are extremely distressed because the online learning model doesn’t work for them. Nowhere is the voice of the children who are left out of these online tutorials heard. There’s a lot we’re being kept in the dark about. We don’t know what the strategic vision is. That’s why we want the decision-makers to feel this pressure from us,” she said.
Titled ‘Open the Country,’ the peaceful rally in front of Parliament ran smoothly until a group of activists started disobedient activities near the government building, then marched to the Georgian Dream HQ and deliberately broke the curfew, holding signs proclaiming: “People are hungry”, “Keep your hands off the activists”, “You will not save the rigged elections,” and “Freedom to Irakli Fangani”.
Irakli Fangani was an activist detained by police in Batumi that day. The reason for his arrest was his having thrown garbage over Irakli Chavleishvili, a former opposition member, and currently an independent member of the Supreme Council of Adjara. Fangani said on Monday that he apologized for what he had done, but if it had to be done again, he would do it.
The police, surprisingly, were not quick to fine the protesters for violating the curfew.