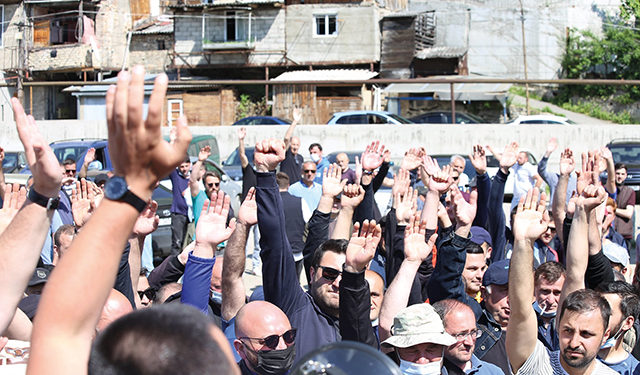 After a nine-day strike, an agreement was reached between the striking employees, trade unions and the administration of IDS Borjomi Georgia on Wednesday, with up to 350 workers of Borjomi Bottling Plants N1 and N2 announcing that the strike is over.

The trade unions reported that, following the continuous protests, most of the demands of the employees had been satisfied. Further, the administration and director of JSC Borjomi had been replaced.

The agreement was signed by the Director of IDS Borjomi Georgia, Merab Akhmeteli, President of the Georgian Trade Unions Confederation, Irakli Petriashvili, and Chairman of the Trade Union of Employees in Agriculture, Trade and Industry, Giorgi Diasamidze.

In accordance with the agreement, IDS Borjomi is to increase the salaries of its workers by 20%-30% and will pay fairly for overtime work.

“The strike of the employees of the Borjomi bottling plant ended in victory!” the trade unions announced.

“Most of the demands of the employees have been met – based on the main demand, salaries will be increased from June 1, and their other working conditions will be improved.

“The administration and director of Borjomi were changed, and the new director agreed to a dialogue with the trade unions and facilitated a fair resolution to the process. The agreement was signed in the presence of the employees at the strike site.”

“Fighting always makes sense!” said the Youth Movement of Trade Unions, one of the organizers and supporters of the strike.

“An agreement was reached between Borjomi management and the striking employees. Merab Akhmeteli, the new director of the Borjomi N1 Factory, met with the striking employees and introduced a number of novelties that the company is to offer them,” announced the IDS Borjomi Georgia administration.

“The new director hopes that the resumption of work at the plants will begin tomorrow. It should be noted that the decision on personnel changes was made by the company due to the current situation.”

On May 25, employees of the Borjomi bottling plant announced that they would picket the plant and not allow anyone to enter or leave. However, no such radical forms of protest were deemed necessary in light of the ultimate decisions made by the employer company management. Prior to that, the striking employees had met with representatives of local authorities and a mediator appointed by the Ministry of Health, with no results achieved for either party.

The employees of the Borjomi bottling factories went on strike on May 18, demanding a pay rise and better working conditions. The protesters claimed their salaries had been reduced by 200-250 GEL over the previous year, and they could not take a break due to lack of staff and were paid too small an amount for overtime work.

Prior to the strike, there was a 21-day mediation between the company, employees and the Trade Union of Agriculture, Trade and Industry, which ended without an agreement, after which the employees began their legal strike. As a result, the operation of Borjomi N1 and N2 bottling factories were suspended.