Something Good about Georgia. Thank You, Eugene Markov! 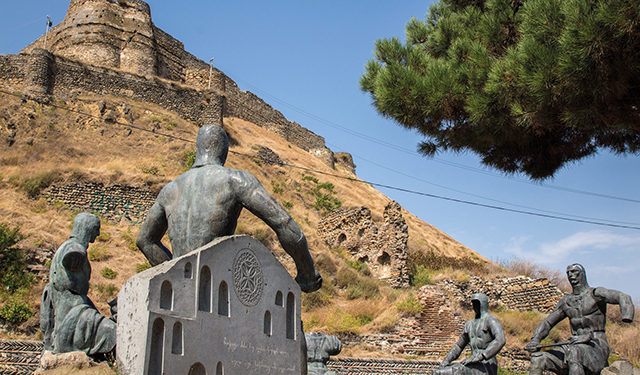 Frankly, I’m ashamed to admit that I had never heard anything about the Russian writer, traveler and ethnographer of the 19th century, Eugene Markov. Yet, all of a sudden, a couple of days ago, the name popped up on my internet site. At the very instance I was going to nonchalantly discard the story, I realized that a Russian was saying something very good about Georgia, a fact rarely heard nowadays from a Russian intellectual.

Curious, I read the piece, going on with voracious eagerness. Something good about Georgia, generally speaking, is not a rarity in principle. After all, figures like Strabo, Dumas and Hegel, suffice it to mention just those three outstanding names, have left to us their graciously flattering laudations in favor of Sakartvelo and its people. But hearing praise from a Russian truly attracts attention.

Markov enthusiastically writes that Europe, and especially Russia, have not yet fully comprehended how significant the historical mission is that Georgia has fulfilled thanks to its centuries-old torment, and with the help of the national dedication of Georgians to European Christendom. Having read these words, it inadvertently occurred to me how natural it is that Europe wants to help Georgia out of the difficulty it has lately found itself in.

Markov continues that the Georgian nation is truly a nation of crusaders. Exactly as the life of a crusading knight consisted of two different worlds, the life of this nation was split into two realms – the prayer on one hand and the fight against conquerors on the other. Well, history is history and nobody has to be embarrassed to meditate with good will over its vicissitudes. Thank God, yesterday’s adversaries are today’s friends. Who knows, someday the same might happen in the Russian-Georgian love-hate political fluids: history has known even stranger alterations.

According to Markov, in more than a thousand years, this nation has kept a firm grip on the sword hilt, and if many of them didn’t have the cross to decorate their combat uniform, they had the same cross embroidered in every single Georgian heart. Because this statement is so true, my sincerely delighted gratitude goes to that singular Russian gentleman of letters. The educated Russian admirer of Sakartvelo thoughtfully concludes that in exactly this way, Georgia became the European Christendom’s border-line sharer and its castle of vigil, always standing to take the first and the harshest adversarial assaults. This minor European ally served a great duty of historic significance to maintain the continent’s security.

I am more than confident in Markov’s precision of thoughts and their truthful verbal formulations. Most likely, a Russian of that magnitude had no reason to exaggerate. He carries on with his exceptional historical factuality and outward openness: “Regardless of all the complexities that Georgia had to cope with, this nation has maintained its beauty, language, customs, and traditions, and of course, faith. The energy and fanaticism of myriad eastern cultures and countries have many times been trained on little Georgia’s unflinching breast, and in spite of the fact that their talons have often caught on the peoples, living in Georgia and to its north, most of them having been proselytized, Georgia managed to remain Christian, and the assault of the East was curbed by the Georgians of those times.”

It is in today’s democratic and friendlier world that we no longer feel the religious differences, and thank God for that, but in the past, as described by Markov, things were totally different. His story goes further, to close in the following emotional words: “The temples of Christian Georgia and the crosses on top of those temples were streaming higher and higher, time and again hiding themselves or strengthening once again, keeping fresh their Christian luster.”

Certainly and deliberately, this does not end with the mere recognition that Eugene Markov once felt so to express such sentiment about Georgia: it should be taken to heart in pursuit of our innate tact, tolerance and political correctness!