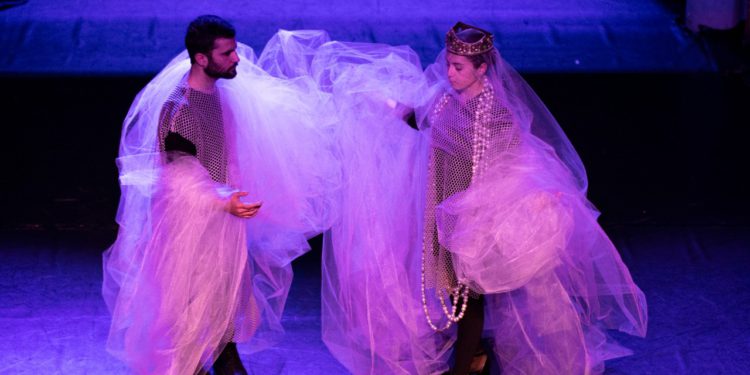 The twelfth-century marriage between a Georgian queen and an Ossetian prince is one of the most potent symbols of Georgian-Ossetian relations. The story of love and dynastic marriage, enriched with the historical background of the Georgian ‘Golden Age’, was brought onstage at the Shota Rustaveli Theater and Film State University with support from the United Kingdom (UK) and UNDP.

The play tells the story of the royal marriage and highlights the roles that women held in the politics and diplomacy of the time. This includes women’s participation in peace processes, particularly the well-known story of Queen Tamar’s wise decision to dispatch Khvashak Tsokali and Kravai Jakeli on an ultimately successful diplomatic mission to negotiate with a rebel nobleman.

“In Georgia, the twelfth century is referred to as the ‘Golden Age.’ Art and literature researchers know it as a ‘Georgian Renaissance.’ It is also a period of close relations between Georgians and Ossetians, as reflected in several dynastic marriages. Reviving these great stories reminds us of historical ties between the people of the Caucasus,” said UNDP Head Nick Beresford.

In 2018, the Caucasian Mosaic, with the European Union (EU) and UNDP support, collaborated with the Shota Rustaveli State University of Theatre and Film to produce a play that also depicted the history of Georgian-Ossetian relations. The collaboration adapted the ancient Caucasian epos Nart Sagas for the theatre. The theatrical adaptation followed a 2017 illustrated Georgian-Ossetian edition of Nart Sagas for children. The ‘Queen Tamar and David Soslan’ play continues a series of theatrical adaptations that serve to bring Georgians and Ossetians closer together, resolve conflict and build peace.

The EU, UK and UNDP supported the undertaking under their joint initiative for building confidence between conflict-divided communities, Confidence Building Early Response Mechanism (COBERM). Working closely with civil society organizations on all sides of the conflict, they addressed some key confidence-building areas, such as healthcare, youth education, people-centered diplomacy, cultural cooperation, minority rights, gender equality and environmental protection. Since its start in 2010, COBERM has supported the implementation of over 200 initiatives, contributing to developing new approaches to peace and confidence building.