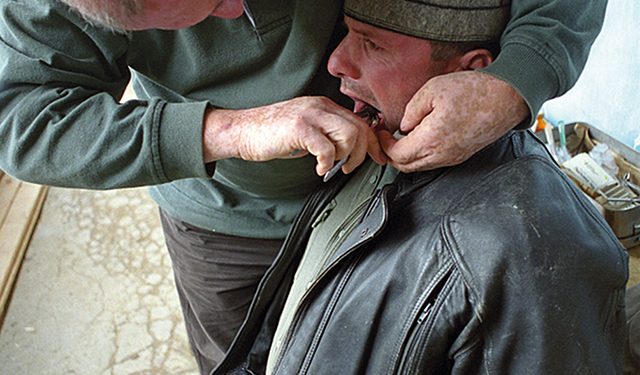 That’s what it feels like trying to leave Svaneti for Tbilisi for a whole winter, first time ever.

Winterizing is a big part of it. Gate and fence replacement to better keep out marauding cows and pigs, which can wreak havoc on our precious fruit trees! (Our pears, hard on the outside, are the juiciest and tastiest I have ever crunched). Gates on hinges for the first time, SO much easier to open when driving in and out.

Putting all things under roofing which should not get a whole winter’s worth of snow wetting them: firewood in sacks, uncut wood for later, scrap metal, more. Extra locks for gates, and warnings to the neighbors that the place will be shut, so please don’t wander through anymore.

Buying and installation of all-weather outdoor video cameras on house and café. These need their own modem indoors, so I can see what they’re seeing from my laptop or phone anywhere in the world. But the installers, coming up from Zugdidi, are waiting on extra cable to come from Tbilisi, so they’re late, so we’re late.

Shutting the shop down, a long process. It begins with not receiving or buying any more goods, trying to minimize what’s left. Painful for all as their goods run out, but they have to get used to it. Also trying to minimize the outstanding credit which villagers have with us. We’re aware that we cannot reduce this to zero, at least not without repo men making threats, but we do have a solution for when we actually leave, which I will only reveal when that has happened; it will satisfy all, and give us peace of mind instead of our wondering who will remember to honor their debts when we return next spring, their being written down notwithstanding.

Packing up everything to take or leave behind. So many different categories: clothing, food, books, papers, electronics. Lists of lists. Boxes, bags, suitcases, backpacks, straps, tape, string. We only have the one car to fill, which we certainly will, including the roof rack.

Goodbyes to all neighbors and friends that we can manage, including a last (for now) visit to the school, with cake and coffee, reminiscing. Yes, we’ll be back! But not for the teaching, or likely for the shop, either. Someone else must take up these batons and run on.

New door hinges to weld onto the still roofless burnt-out garage, to keep out the curious.

In the midst of all this, seeing the worst water flow (often cutting out altogether) and electricity outages in years, it seems. Just another thing to play on the nerves. Some events spurring us away, others holding us back, in a seemingly endless tug of war… We won’t miss those water or power issues, that’s for sure, although we continue to feel for those who don’t have the luxury of the choice we have made to depart from them for a while.

So many friends and relatives await us in Tbilisi, Kakheti and elsewhere, those with whom we have had little time the last 12 years to stop and catch up. Renewing of old friendships will be precious. I feel like some people must be wondering if we are actually still a couple, so seldom have we been appearing anywhere together except in Svaneti! Rest assured, we are, and we’ll prove it.

A few days more to go until our migration south-east. Although the Big City beckons us on, the Little Village is having a hard time letting go. Here we are.