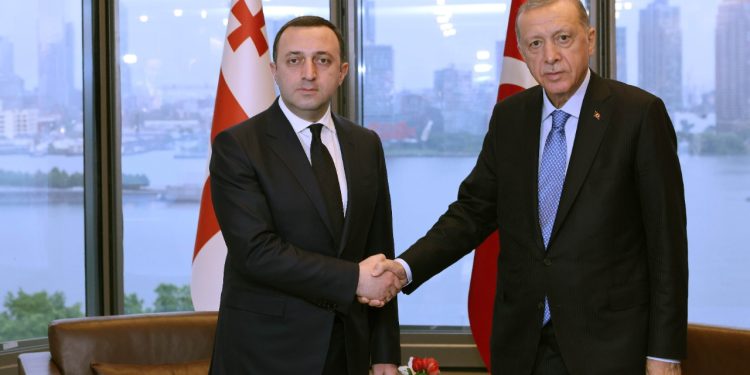 Strategic partnership, trade and economic relations, security environment within the region and all over the world were among the topics discussed by and between Irakli Garbashvili, Prime Minister of Georgia and Recep Tayyip Erdoğan, President of the Republic of Turkey today.

Meeting held within the scope of the United Nations General Assembly (UNGA) was focused on the significance of close friendly and partnership relations existing between the two counties. Substantial results of the strategic partnership between the two countries, political dynamics of high-level bilateral interaction, engagement and active cooperation of Georgia and Republic of Turkey in projects of regional geo-political nature were noted at the meeting.

Discussion topics also included the war waged in Ukraine and resulting challenges in the complex security environment of the world and region. Significance of peace and stability was noted for ensuring the further development and long-term prosperity of the region. Within this context, agreement reached last year between Azerbaijan and Armenia with a mediation of Garibashvili was praised , as it resulted in the release of Armenian prisoners by Azerbaijan in return of essential maps shared by Armenia with Azerbaijan. It was thereby stated that further advancement of the effective cooperation between Georgia and Republic of Turkey in every direction is vital for the stable and sustainable development of the region. The Prime Minister of Georgia invited the President of the Republic of Turkey to Georgia.