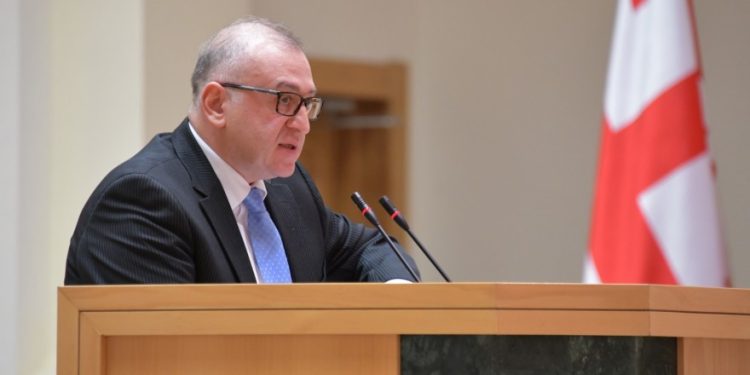 The President of the National Bank, Koba Gvenetadze introduced the Main Directions of Monetary Policy for 2023-2025.

As he noted, the average annual inflation rate for the period of 2009 and November 2022 is 4,7%, which is equal to the target index.

“The inflation target index before 2018 was over 3%, and if we count from 2009, its average level is 4,7%, which is significantly lower than the target,” he stated.

“Under the targeting, the target inflation index can be achieved through the monetary policy rate by the National Bank. The decision on the change of the monetary policy rate is being made as a result of estimation of the macroeconomic milieu, financial market situation, inflation forecast, macroeconomic risks and inflation expectations. In case, if the inflation forecast exceeds the target index, the monetary policy rate is increased or remain stricter, or on the contrary, if the inflation forecast is below the target index, then the monetary policy is softened, which means the reduction of its rate. The target short-term interest rate at the money market can be achieved by the NB through application of the instruments: refinancing loans, open market 1-month instrument, deposit certificates, state securities transactions at the secondary market, currency interventions, permanent instruments, minimal reserve requirements etc. The continuing shocks for the last years resulted in inflation higher than its target index. The restrictions under the pandemic entailed strong inflation pressure worldwide. The restrictions destroyed the supply chains and increased manufacture costs. At the same time, the transport and other transaction costs in the world have been drastically increased, which has been reflected on the ultimate prices. The inflation pressure became even more acute by the increased prices at the international markets,” he noted and dwelt on the reasons for stricter monetary policy and global challenges.

“Inflation should be reduced after the stricter monetary policy and temporary shocks, though the Russian war started against Ukraine in February 2022, accompanied by the pandemic-related restrictions and the lingering problem of provision at the international market even further suspended the supplies. This fact protracted the inflation, which creates further risks and thus, the Bank faced the necessity to adopt stricter monetary policy. Despite the slowed economic growth as a result of the stricter policy in the partner states, the foreign demand in Georgia is strong at the account of tourism and immigrant money, which in total facilitates high economic activity. The strong demand slows down inflation reduction process. For instance, the rents are drastically increased and providing all the above-mentioned factors, the annual inflation is still high despite that the exchange rate is stronger. The inflation peak is overcome and we already see the reduction of inflation,” he added.

As he explains, the acute geopolitical developments in the world significantly complicate monetary policy. Despite the stable prices at the international market and positive tendencies, prices on food and oil are still high, against the background of which global inflation increased, which requires stricter and synchronized monetary policy. The reporter thanked the Parliament for interesting and productive cooperation for 7 years.

“There were debates, discussions and sometimes acute criticism for the last 7 years, though let me note that with the support of the Parliament, many, maybe unpopular but timely and necessary Drafts have been approved and significant decisions made, which increased the sustainability of our macroeconomic and financial sector,” he added.