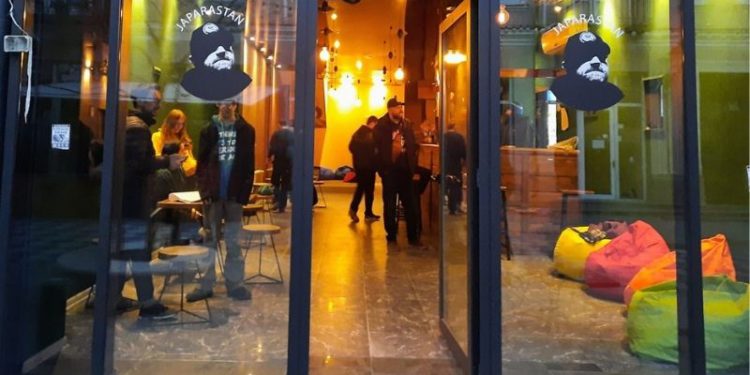 The employees of the Ministry of Internal Affairs of Georgia sealed the bar ‘With Japara,’ which was opened by Zurab Japaridze, the leader of the opposition political party Girchi, as a sign of protest against the current coronavirus-related restrictions, and suspended its activities.

“Employees of the Old Tbilisi Main Division of the Tbilisi Police Department under the Ministry of Internal Affairs sealed off a bar located on D. Agmashenebeli Avenue and suspended its economic activities.

“It was established that temporary owner of the mentioned facility, Z.J., was fined with GEL 2,000 by the Labor Inspection Department on February 14 for non-compliance with the requirements of the Resolution “On Approval of Isolation and Quarantine Rules” adopted by the Georgian government on May 23, 2020, crime envisaged under the article 4210 of the Code of Administrative Offences.

“Law enforcers ascertained that the facility was engaged in prohibited economic activities, in particular, the company operated a nightclub and bar where citizens went and stayed even after curfew – 21:00 pm.

“Due to the repeated economic activities prohibited by the law, the investigation was launched under Article 2481 of the Criminal Code of Georgia, which stipulates repeated violation of the rules of isolation and quarantine.

“As part of the investigation, law enforcement officers conducted search activities and sealed the facility.

“In order to expose new circumstances, operative and investigative activities are in progress.

“The Ministry of Internal Affairs would like to remind citizens that violation of the rules of isolation and quarantine shall result in administrative liability and fine in the amount of 2,000 GEL for physical persons and 10,000 GEL for a legal entity in accordance with Article 42 (10) under the Code of Administrative Offences. The secondary fine will be treated as a criminal offense committed under the Criminal Code of Georgia,” reads the statement released by the MIA.

Earlier on February 13, the Labor Inspectorate entered the bar ‘With Japara’ and fined the facility 2000 GEL.

The Labor Inspectorate representatives warned that if the bar continued to operate despite the fine, then it would be sealed.

“I demanded my MP status to be terminated and [Parliment] did not do it, so I had to open my bar to get the mandate terminated,” Zurab Japaridze told reporters.

Japaridze claims he cannot be detained because he is protected by his MP Mandate, a mandate he no longer wants.