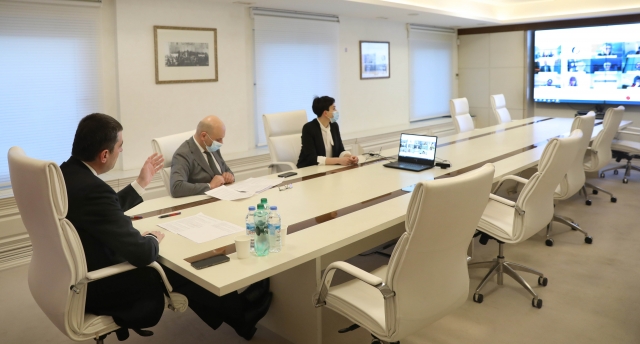 The World Bank (WB) Partnership Strategy with Georgia and specific priorities including a potential WB support towards the National Plan of Vaccination in Georgia were discussed by and between Giorgi Gakharia, Prime Minister of Georgia and Anna Bjerde, Vice President of the World Bank for Europe and Central Asia (ECA) at a meeting held in a format of a video conference.

Giorgi Gakharia noted that apart from the COVAX platform, the Government of Georgia is actively interacting with various countries to ensure a timely supply of vaccines to Georgia and support demonstrated by international partners in this process has tremendous importance.

The focus was also made on the current and planned projects within the investment portfolio of the World Bank, including a micro, small and medium enterprise (SME) support and economic recovery project, human capital development program and others. As Prime Minister of Georgia noted during the meeting, programs implemented by the World Bank have helped authorities of the country to implement such significant reforms as a pension system reform, deposit insurance scheme, capital market development, public-private partnership framework reform and others. In the opinion of Giorgi Gakharia, implementation of a comprehensive reform agenda and development of a respective strategy towards the state-owned enterprises (SOEs) with support of the World Bank is of principal importance. Active work is progressing towards this end.

The readiness of the World Bank was assured during the meeting towards the structural and economic reforms to be implemented in Georgia, as envisaged in the key plan of the Government of Georgia for the EU integration of the country and for filing an official application for EU membership by 2024.

Prime Minister of Georgia and Vice President of the World Bank also discussed the partnership within the framework of Development Policy Operations (DPOs), which is intended to lead towards inclusive growth and increased competitiveness of the private sector in the country. These aims are particularly important during challenging times. Giorgi Gakharia also noted that the Government of Georgia highly appreciates the response of the World Bank towards the identified needs of the country, including the projects implemented within the framework of a strategic response to the COVID-19 pandemic, which had a huge impact on the economy and population of the country.

Discussions were also related to the social support programs for the affected population, business-enabling measures, as well as assistance to the tourism sector as one of the main driving forces of the Georgian economy in the agenda of economic recovery.

Prime Minister of Georgia noted that it is a key priority of the country to get transformed into a transport and logistics hub in the region and support of projects with such magnitude by international partners – especially in the post-pandemic phase – are most important to thereby enable a respective positioning of Georgia at an international level.

World Bank has one of the most diversified investment portfolios in Georgia in a total value of 2.7 billion USD.

Video conference engaged Sebastian Molineus, Regional Director of the World Bank for the South Caucasus and WB officials leading the discussed topics both within the HQ and RO of the IFI. Georgia was also represented in the meeting by Ivane Matchavariani, Minister of Finance of Georgia; Irakli Nadareishvili, Deputy Minister of Economy and Sustainable Development of Georgia; Tamar Gabunia, Deputy Minister of Healthcare of Georgia.