PM: I had Productive Conversation with PM of Greece about Georgian-Greek Cooperation 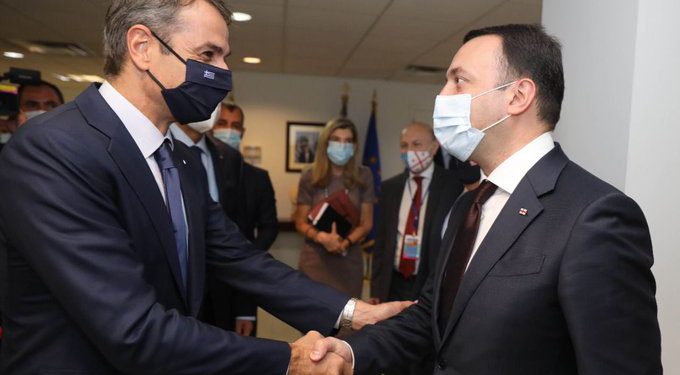 “Held productive talks Primeminister on matters regarding Georgian-Greek Cooperation. Greatly appreciate Greek’s support to our EU and Euro-Atlantic integration. We still have a great potential to expand the scope of our relations in various sectors, specifically in trade, econ & tourism,” tweeted the Prime Minister of Georgia Irakli Garibashvili.

Garibashvili met with Kyriakos Mitsotakis, Prime Minister of Greece, in New York within the framework of the UN General Assembly. At the meeting, It was noted that the long-standing historical and cultural ties between Georgia and Greece are based on common European values, respect for the fundamental principles of democracy, freedom, and international law.

Primer Minister of Georgia thanked Kyriakos Mitsotakis for supporting Georgia’s territorial integrity and sovereignty, as well as the country’s European and Euro-Atlantic integration.

The meeting focused on the importance of deepening bilateral trade and economic ties. It was noted that the development of tourism plays an important role in the post-pandemic recovery phase.

The Prime Minister reiterated Georgia’s commitment to the European and Euro-Atlantic integration process and noted that proper appreciation of the progress made by the Associated Partners, including at the forthcoming Eastern Partnership Summit, is of great importance.

During the meeting, the conversation focused on fruitful cooperation within international organizations. The Prime Minister of Georgia thanked Greece for co-authoring and supporting UN resolutions on Georgia.

Held productive talks w/@PrimeministerGR on matters regarding 🇬🇪-🇬🇷 cooperation. Greatly appreciate 🇬🇷’s support to our 🇪🇺 and Euro-Atlantic integration. We still have a great potential to expand the scope of our relations in various sectors,specifically in trade, econ &tourism. pic.twitter.com/5LLEwdWicR