On the Works of Marjory Wardrop. Part II 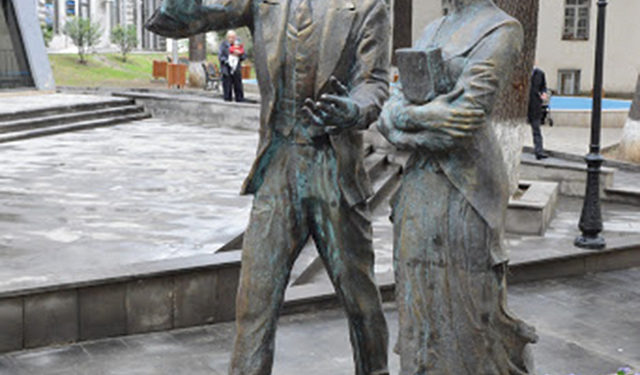 Enclosed within the solid walls of a Victorian house, Marjory proceeded her perception of Georgia through translating activities and the first book she published was the translation of “Georgian Folk Tales”, 1894, followed by “Life of St Nino”, 1900. The latter informed the English reader about the life and mission of St Nino who converted Georgia to Christianity as early as in 327.

In 1894, when Oliver left for a second journey to Georgia, Marjory wrote to him: “I do not know why I can think of nothing to speak about but Georgia! I am happy for you to be there, but oh! to be with you.” It is clear that for a twenty-year-old girl that could never mean a mere satisfaction of cognitive goals. That was falling in love, but not with a handsome prince… That was falling in love with a remote country, its ancient culture and people.

Like in all fairy-tales, miracles were to happen in Marjory’s life as well. The first two miracles that awaited her were two forthcoming visits to Georgia. The third and the greatest miracle to happen was an encounter with the greatest Renaissance poet of Georgia, Shota Rustveli. Marjory, who successfully mastered the Georgian language, began meticulous and thorough studies of a Georgian epic poem “The Man in the Panther’s Skin” by Shota Rustveli. The medieval culture in Georgia reached its peak of development by the end of XII century and the beginning of XIII century. The best representation of Georgian culture of that period of time, known as “The Golden Age”, is certainly “The Man in the Panther’s Skin”, deemed to be one amongst the masterpieces of the world literature. The goal of her endeavors was to translate the poem into her native tongue. It took her full eighteen years to study one of the most difficult, arguable, polyphonic texts and to accomplish a prose English version of the masterpiece with 1576 quatrains.

Unlike many love stories, Nestan-Darejan, the leading female character of the poem, dares to be the first to reveal her feelings to her beloved man, Tariel – the knight in the panther’s skin, and forwards a letter to him. It happened so that Marjory summoned her courage and forwarded a letter to her beloved Georgia. The letter was addressed personally to Prince Ilia Chavchavadze, the poet, statesman and the most prominent figure of Georgia, called “The Uncrowned King” and “The Father of the Nation”. Expressing her interest and love for Georgia, Marjory requested permission to publish Ilia Chavchavadze’s poem “The Hermit” in her English poetical translation.

The letter, that reached the Georgian poet from faraway Albion, was a miracle itself as far as it was written almost in perfect Georgian by a young lady, who had never been in Georgia, was self-educated and could translate poetry into English. Prince Ilia Chavchavadze, the editor of Tbilisi daily newspaper “Iveria”, printed the letter on the very cover of one of its issues. Amazing news spread in the speediest way, causing admiration for the young lady and gratitude for such interest from the outside world. Marjory was invited to Georgia and a few months later, in December 1894, she arrived in the Adjarian port Batumi in Western Georgia, the Black Sea Coast via Greece, accompanied by her mother. Her first travels to Georgia intentionally symbolized the route of the Argonauts to the land of Medea.

Oliver wrote the sequence to their reception in Kutaisi, the city in Western Georgia: “the platform, waiting rooms and the outside of the station were all occupied by a vast crowd of the cream of Kutaisi society appareled in gorgeous raiment: bouquets of the most brilliant hue were presented and great enthusiasm displayed.”

Marjory and her mother stayed in Georgia for two months that permitted her to travel all over the country and besides the urban life to feel and learn rural Georgia. When in Guria, one of the picturesque western regions of the country, Marjory enjoyed and loved the folk and spoke to them in their dialect.
Happy and elated, Marjory returned to England and in 1895, “The Hermit” was published in London with the translator’s preface, where she wrote: “While most English readers are, to some extent, acquainted with the literature of Persia, there are but few who are aware of the existence of Georgian literature. Yet Georgia is well worthy of attention. The Man in the Panther’s Skin, by Rust’haveli, the great epic poet of the 12th century, loses nothing by comparison with Firdausi’s Shah Nameh; but what modern Persian can be placed beside Barat’hashvili or Chavchavadze?

Endowed by nature with exceptional gifts, assimilating alike the culture of the East and West, the Christian kingdom of the Caucasus achieved a high degree of refinement and enlightenment at a very early date; and, despite the fierce blasts of war that have swept ceaselessly over the land, the light of literature has been kept alive.”

The following year, it was Prince Ilia Chavchavadze who invited Marjory and his mother to Georgia. It is said that this time the grateful population greeted them at Tbilisi railway station. Poets recited specially dedicated poems, choirs and bands played and sang in honor of the dear guest. When in Tbilisi Marjory and her mother stayed at the London Hotel in Atonely Street, in the very centre and heart of the city. Tbilisi possessed wonderful buildings, squares, arcades and a newly built imposing Opera House in the pseudo Moorish-style. Marjory would learn that the first Opera House was founded in Tbilisi in 1851. In 1856 Alexandre Dumas attended one of the Opera performances in Tbilisi and described its hall as one of the most beautiful and rich interiors ever seen. Unfortunately, a sudden fire destroyed that building and a new one was built twenty years later.

Tbilisi attracted Marjory not only as a multinational city and an important centre of South Caucasia but also as a town of exotic landscape. Here, colorful streets stretched from lowland to lofty places or mountains and rocks, from where they proudly overlooked the River Mtkvari (Kura). Modern architectural tendencies – Classicism, Neo-Moorish, and Art Nouveau had been already established in the city but buildings with European facades looked absolutely oriental from behind, where ornate loggias with stained glass and overhanging carved wooden balconies, as if made of lace, fitting spiral stairs, looked over gorgeous courtyards or patios. Tbilisi was the place where the West and the East met each other.
Feted by the host, Marjory wholeheartedly enjoyed banquets, receptions, meetings. She kindly reciprocated the cordial welcome by wearing the Georgian national costume on several occasions.