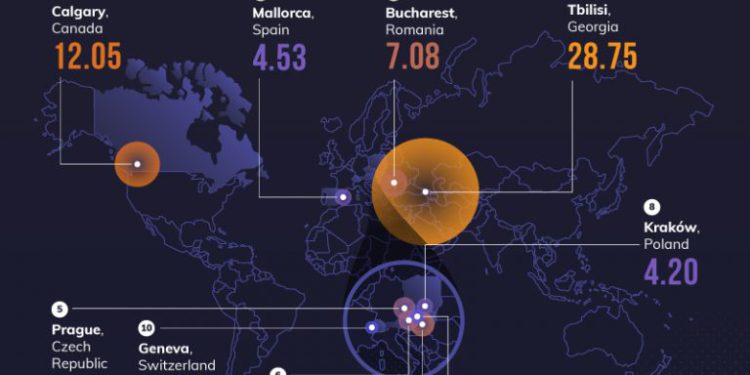 Which city in the world has the highest concentration of bitcoin ATMs in relation to the local GDP, suggesting that cryptocurrencies play a significant role in the regional economy?

The Georgian capital of Tbilisi seems an unlikely contender for the top spot on this list of international cities pioneering bitcoin adoption. But the former Soviet republic of Georgia, with a population fewer than four million people, is now the second-largest miner of cryptocurrency in the world, a new data study has revealed.

“Inexpensive hydropower and a lack of federal regulation have turned the country into a “virtual printing press” for virtual money, giving the 23 bitcoin ATMs in Tbilisi an outsized presence in the Georgian economy,” reads the report.

Bitcoin also has a disproportionately large presence in Mallorca, even compared with Spain’s major metropoles like Barcelona and Madrid. The Mediterranean island region is a veritable playground for vacationing Europeans, making Mallorca an ideal location to offer an additional currency exchange option. Operators report that bitcoin ATMs placed in touristy areas perform exceedingly well, and hotels and restaurants that accept bitcoin payments receive tips that are 20% more generous than usual.

Where do Crypto Enthusiasts Actually Live?

The authors of the study were curious to know what the top global cities were for bitcoin enthusiasts. Based on the primary data, using advanced techniques, they scraped information from Twitter to identify the top cities listed in the profiles of Twitter crypto users.

This chart reveals that the top crypto-lover cities line up pretty well with the most populous cities in the world, but with exceptions. San Francisco is a fairly small city on the world stage, not even breaking a million in terms of the population since the lastest official counts.