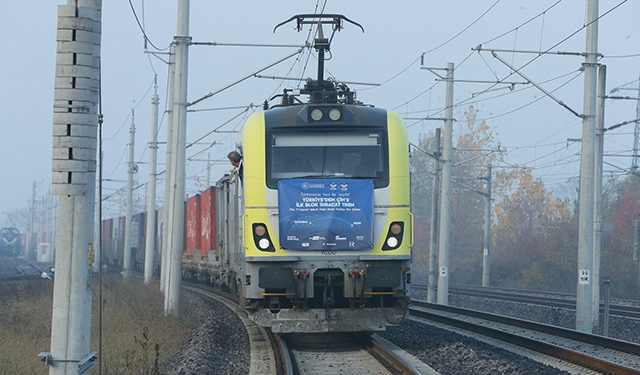 A train carrying goods from Turkey to China departs from the northwestern province of Kocaeli, Turkey, 2020. Source: AA

The war in Ukraine is a devastating blow to the liberal world order. Whether Russia is defeated, victorious or stalled in a long war of attrition, the balance of power prevalent in the decades following the end of the Cold War will not be the same. A critical element of the changing geopolitical landscape will be the connectivity across the Eurasian landmass.

The Russia route, which for decades served as a major corridor between the EU and China, is facing troubles, as sanctions imposed on Moscow make Beijing fearful of potential negative economic effects on the Chinese economy.

This creates favorable conditions for alternative trade corridors. And since the route via the Arctic goes along Russia’s shoreline and is therefore not viable in the long run because of the sanctions, China-EU trade will become mainly concentrated through the Indian Ocean and Red Sea. Yet another possibility could be the so-called Middle Corridor, which runs from Turkey to Central Asia and China via the South Caucasus and the Caspian Sea. Geographically, this is the shortest route between the western part of China and the EU, and quite naturally the countries on the road are set to gain most from reverberations in the global networks.

There is also the Turkey factor to consider. The country increased its outreach to Central Asia following Azerbaijan’s victory in the 2020 war with Armenia. Azerbaijan’s location has served as a launching pad for Ankara. True, its potential is nevertheless constrained, as Russia and China are more powerful both economically and militarily. And then the Iranian factor- Iran which, along with Russia, loathes any non-regional presence in the Caspian region.

What is important here is that the Central Asian states fearing Russia, but also in many cases feeling uncomfortable with China, seek diversification of their foreign and economic ties. They prefer to have as many foreign actors as possible to balance the two big neighbors. This creates a favorable momentum for Turkey’s bigger penetration into the region. Active diplomacy (visits, pledges to increase bilateral trade) has been on the rise. The Russian invasion of Ukraine served as yet another impetus. The Central Asian states, Kazakhstan in particular, are also seeking greater Turkish engagement because of changes in connectivity patterns across Eurasia.

The Middle Corridor is now increasingly seen as a plausible alternative to the Russian route. At least this is the sentiment the Kazakh President Kassym-Jomart Tokayev conveyed to his Turkish colleague during a visit to Ankara in May. The joint statement had one interesting passage on connectivity: “The Parties agreed to enhance cooperation in transport and logistics, commending the growth of cargo transit via the Baku-Tbilisi-Kars railroad and the East-West Middle Corridor. Noting fixed complex rates for the transportation of wagons and containers on the Trans-Caspian direction of the Middle Corridor, the Parties emphasized its importance for cargo transit via the new Baku-Tbilisi-Kars network. The Parties stressed the importance of strengthening coordination between the relevant institutions for the effective and sustainable use of the Middle Corridor.”

There is also the Chinese element to factor in. For Beijing, trade route alternatives are essential. As was the case with the Silk Roads in ancient and medieval times, trade corridors rarely remain static, adjusting to emerging opportunities and evading potential geopolitical dangers. Nor is China’s massive Belt and Road Initiative (BRI) as static as many have portrayed it. It evolves and adjusts to varying circumstances, and though the South Caucasus has not featured high in the BRI documents, the region can easily fall into Chinese interests amid the emerging geopolitical reality.

Critical infrastructure is already there. The Baku-Tbilisi-Kars railway and the growing and improving web of region-wide roads from the Caspian to the Black Sea serve as a good starting point for China-EU trade relations through the South Caucasus.

Yet geography still constitutes a major obstacle. The Middle Corridor is a multi-modal route consisting of sea and land lines. It makes shipment more complex. There is also a glaring lack of necessary infrastructure in the Caspian Sea to guarantee easier transit from Central Asian ports to Azerbaijan. The infrastructure is also insufficient in the Black Sea, where the need to have a deep sea port has now attained a bigger significance. The Anaklia saga is ongoing, with no end in sight. And even if Tbilisi firmly decides to build the port, it would take years to complete – a critical period for establishing itself as a reliable transit route.

More broadly, China has not shown real interest in the South Caucasus. From the Chinese perspective, the region remains under Russia’s geopolitical purview and intrusion from Beijing might not be welcome in Moscow. However, as other cases show, China can also go against Russian interests when and where it is critically important for Beijing. It does so in Central Asia and can do so in the South Caucasus too.

Thus, though a number of indications point to the re-emergence of the Middle Corridor as a potential transit route between Central Asia and Europe, numerous obstacles such as geography and inadequate infrastructure will continue to hamper the prospects.