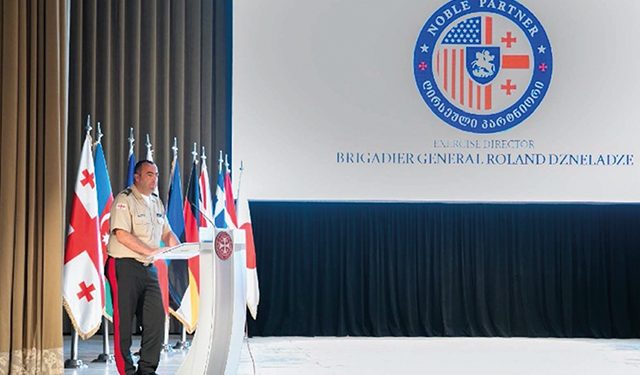 Brigadier General Roalnd Dzneladze introduces the exercise to service members and guests in Tbilisi. Photo by Georgian Ministry of Defense

For the sixth time, Georgia is home to one of the region’s largest annual military exercises, Noble Partner. Over 2,400 service members from 21 countries have arrived in the country, along with fleets of armored vehicles. NATO and other partner nation representatives attended a commencement speech by Major General Giorgi Matiashvili, the Commander of the Defense Forces, complete with formations of troops and vehicles.

General Matiashvili reiterated the mission of the US- and Georgia-led exercises “to increase the readiness and interoperability between Georgia, the USA, regional partners and allied countries to ensure a stable and secure environment in the Black Sea region.” This year’s military attendees include familiar friends: Georgia, USA, Bulgaria, Romania, Moldova, Greece, Great Britain, Turkey, Slovakia, Norway, Hungary, Lithuania, Azerbaijan, Germany, Bosnia and Herzegovina, Estonia, Poland, and the Lithuania-Poland-Ukraine Multinational Brigade.

Sweden has historically played both sides: Close ties and economic friendship with Europe and NATO, a policy of tolerance and cohesion with Russia

And this year, a pair of newcomers are present for their first time. Japan and Sweden have sent their own detachments to take part in the exercises, marking a maiden voyage for their troops. The arrival of members of the Japanese Ground Self-Defense Force (JGSDF) and the Swedish Armed Forces marks an interesting chapter, not only for Georgia, but also for these two.

Both nations have unique defense policies, particularly when it relates to NATO and its policies. Sweden has been a close ally of the alliance, becoming a formal invitee in early July and awaiting another invitation to sign the Washington Treaty, after which it will become a NATO Ally, something perpendicular to its historic avoidance of such broad agreements.

Sharing this vision in neutrality, Japan has also shied away from large-scale military foreign entanglements. The country’s constitution prohibits them from engaging in warfare, limits the size of its armed forces, and prohibits long-range ballistic missile systems. Imposed by the Allied powers after the Second World War, they formally “renounce war as a sovereign right of the nation and the threat or use of force as means of settling international disputes.”

Despite these shared outlooks on conflict, both nations have seen a surprising shift in foreign policy. Sweden, along with her neighbor Finland, has moved unprecedentedly swiftly to join Europe’s premier military alliance – NATO. Japan has also shifted its traditionally passive stance to one of more aggressive defense and reinvested in its military infrastructure, something that had largely atrophied.

Georgia, a prized objective for Moscow, is now seeing new faces in its struggle to resist Russian influence in the region

Unquestionably, the Russian invasion of Ukraine in late February forced a massive pivot for both countries. Sweden and Japan have had a less-than-optimal relationship with the Kremlin in recent decades. Nonetheless, prior to the first incursion in 2014, and now, the two have moved to a state of militaristic caution as Moscow becomes more erratic.

Sweden
The Nordic country has historically played both sides. Close ties and economic friendship with Europe and NATO, and a policy of tolerance and cohesion with Russia. Moscow’s recognition of Georgia’s occupied territories worsened Sweden’s relations with them, with then-foreign minister Carl Bildt comparing it to actions by Germany in 1939.

The Kremlin-ordered operation in Ukraine in 2014, coupled with continuous airspace violations in its own territory, pushed Stockholm further away. Now, Sweden appears to have made the commitment to assist Europe against Russian aggression. With impending NATO membership a very real possibility, their involvement in Noble Partner signifies a willingness to put proverbial boots on the ground in key territory.

Japan and Russia never agreed to a formal peace treaty after WWII, and as such the they are technically at war

Russia recognizes that Sweden, as well as Finland, becoming a part of NATO presents a unique difficulty in their northern frontier regions. Additionally, the prospect of the Baltic Sea becoming a “NATO Lake” is something they likely had not perceived becoming a real issue. The region hosts some of Russia’s most important strategic missile and air assets, as well as Russia’s Northern Fleet around the Kola Peninsula.

The commitment of Swedish forces in the South Caucasus shows Russia that the Nordic nation is firm in its stance against them. Georgia, a prized objective for Moscow, is now seeing new faces in its struggle to resist Russian influence in the region. With its grip slipping in the contested Nagorno-Karabakh, the Kremlin is likely seeing its control of the area disappearing.

Japan
Historically, Japan’s relations with Russia have been strained. Interestingly, they never agreed to a formal peace treaty after the Second World War, and as such the two nations are technically at war. The two had been in negotiations on a peace treaty in order to normalize relations when Moscow pulled out of the talks abruptly. Following Japan joining the international sanctions packages, Russia also refused free travel to a disputed series of islands north of Japan.

The Kuril Islands, an archipelago north of Japan’s Hokkaido island, contains four islands that have been contested since the closing of WWII. In addition to a formal peace, the talks had included an agreement about these territories. Russia’s withdrawal caused Japan’s Prime Minister Fumio Kishida to say “Russia’s actions are extremely unreasonable and totally unacceptable.”

Japan’s traditional neutrality has come into question, with several legislative measures taken to re-envision Article 9 of their constitution. This article, that severely restricts military activities outside of the nation, have been revised, with Japanese troops being deployed to Africa and the Middle East, albeit on peaceful missions. Additionally, the bolstering of its military presence in the north near those contested islands, and a plan to develop over 1,000 missile systems, may signal a change in Tokyo’s foreign policy.

The decision to send troops to the South Caucasus may be another step outside their proverbial comfort zone. Japan’s coordination with Europe and the United States against Russia may be leverage for use to regain their islands, but also a move to flex their blossoming martial capabilities. As with Sweden, Tokyo has shown its willingness to defy Moscow in its expansionist endeavors.

While Noble Partner is only a two-week exercise, it is a united commitment to Georgia that is strategically important. The expansion of that commitment to new participants shows that the region is not within the grasp of Moscow, despite its overt and covert attempts. The arrival of these new friends is an insight into the larger forces at play, with Georgia in the center. These forces are summed up in the words of US Marine Attaché in Georgia, Colonel James Thompson: “To train, be prepared, and, as steel sharpens steel, together, allied forces learn from Georgians and Georgians learn from allies, and together we’re stronger.”