He noted that annual inflation was 7.2% in March. It is noteworthy that since December last year, the inflation rate has been reduced by subsidies for utility bills.

“The reduction of inflation since last December was related to the subsidization of utility fees, which was of a temporary nature. The end of this subsidy in March 2021 was reflected in the upward shift of inflation. It is noteworthy that the subsidy will also have a base effect with a significant upward impact on the annual inflation rate in December 2021 and January-February 2022. Given the changed circumstances since the previous meeting, according to the updated forecast, other things being equal, inflation will average around 6.5% in 2021 and then gradually approach the target. The forecast for economic growth is about 4% in the baseline scenario,” the NBG Head said.

“Inflation pressures, coming from rising prices on international commodity markets, persists, being reflected in the increased prices for oil products and selected food items. At the same time, on the back of a big drop in output due to the pandemic, the average production costs are still high, being another source for the upward pressure on inflation.

“The Committee also took into account that the recent developments in the trading partner economies have, to some extent, also been transferred to the local foreign exchange market. Given the high dollarization of the economy, this puts even more pressure on prices. Moreover, there is high uncertainty remaining about the prospects of the tourism industry in Georgia as well as globally. Amid deteriorating epidemiological conditions, the fiscal deficit remains at high level, pushing domestic demand up.

“Regarding the lending, despite the recent slowdown, as a result of maintaining adequate buffers of liquidity in the financial sector, it continues to grow fairly. Overall, the increase in domestic demand boosts imports. In view of the prolonged deviation of inflation from its target and intensified inflationary pressures, the Committee decided to increase the monetary policy rate by 1 percentage point. A possible further tightening of monetary policy will depend on inflation expectations and the dynamics of factors affecting it,” he said. 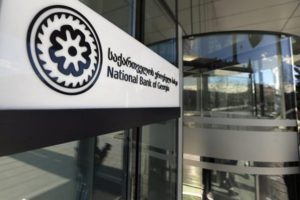 “The National Bank of Georgia is constantly monitoring the current economic processes and financial markets and will use all the tools at its disposal to ensure price stability,” the NBG said.

The next meeting of the Monetary Policy Committee will be held on June 23, 2021.