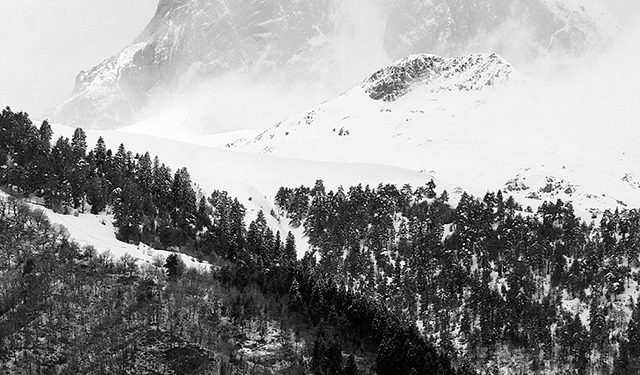 How little can you show of Mt. Ushba, hardest climb in the Caucasus, and still have it be a) recognizable and b) a powerful image? This was my challenge a few days ago on the way to Mestia for some shopping, an hour’s drive at most.

Ushba has several different main angles of view, giving you the twin peaks side by side, at ¾ angles or so, or one obscuring the other. These, plus its different looks according to season, weather and lighting, give many photographic possibilities. My own count over a couple of decades is over 600 distinct shots. Not bad considering that the mountain is infamous for making its own clouds to wear across the peaks; and it’s not even visible right from my home: I have to walk a minimum of 10 minutes to see it at all.

The shopping trip had changing visibility, but at least it wasn’t zero or snowing hard, so I took the camera and lenses just in case. Sure enough, a stop just before Becho (2 peaks nearly edge-on, mostly the south one visible) gave me something after a few minutes. I drove on to Mestia and ran through my list of duties.

After this, I drove towards Ushguli, and just outside Mestia the peaks reared into view side by side, another classic view. Plenty of cloud too, but in this case adding to the drama instead of obscuring the image altogether. I usually shoot horizontal and vertical versions of the same scene: you never know when a book cover might be called for, and I’m allowed to dream…

I have been rendering most of my recent landscapes in black and white only, and the day’s shots worked well stripped of whatever minimal color they had in the first place. My philosophy in photography is that color can distract from good form, tones, lighting and composition, although it certainly sometimes has its place. I wanted something which was obviously Ushba, but different from all other shots I have so far, and the weather did not disappoint. Sometimes less can be so much more, especially when one already has enough frames of the mountain in full color with a cloudless sky!

It used to be I had to wait an hour, or sometimes a week, to get my 35mm film negatives and 10 x 15 cm prints back from processing. This was agony. Often, too, there was disappointment, as the straight prints were far from what my mind’s eye, and the negative film, offered and suggested. So I eventually bought a 4000 dpi dedicated film scanner, and began converting my best of 11000 negative and slide frames from several decades’ work into 20 mega-pixel digital versions. This, while getting much of the tonal range actually present in the originals, also required much time cleaning up dust and scratches.

Switching to digital in 2008, initially a 10-mega-pixel camera which my photographic mentor in the UK pushed on me for 100 Pounds, I have never looked back. No-one had told me sufficiently loudly how much information a RAW digital file holds! I had been under the illusion that digital would not be able to compete with my scanned negatives for tonal range. Quickly I saw how untrue this is, and now have such an easier, quicker time getting print-ready images I am pleased with. Why not? I learned composition, tones and the other basics of photography with film, and now am set free to work more automatically to translate the mind’s eye’s image to print. And every day, every hour, anywhere I am, new pictures await.