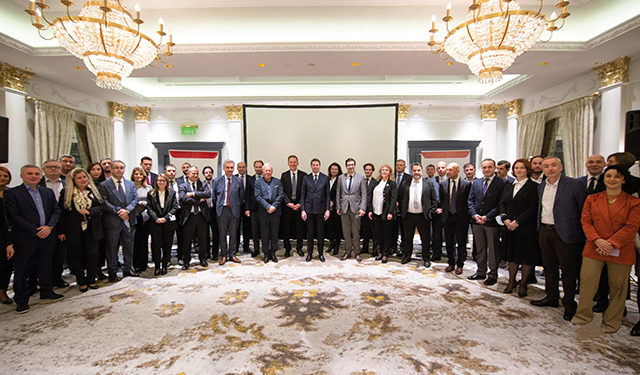 In ever-deepening economic cooperation between it and France, Georgia welcomed yet another French trade and business mission this November. Laurent Germain, CEO of Egis and Chairman of the MEDEF International France-Georgia Business Council, led a 20-company business delegation to Tbilisi on 15 and 16 November. This visit was the sixth business mission of MEDEF International in the past ten years. Companies were represented in agriculture, infrastructure, digital, tourism, transport, and defense and security.

“The main takeaway of the two-day visit is the conviction and conclusions of the 29 representatives of French companies that the economic potential of Georgia is very significant,” Laurent Germain told GEORGIA TODAY. “We had meetings with ministers, with the Business Association of Georgia, and at the end of the two days, we had a list of concrete projects the French companies can bid on in the next month. The main areas of interest were infrastructure and transport, renewable energy, tourism, and water infrastructure management, with a lot of new projects that will be launched in the next weeks and months by Georgia.”

The visit took place in the context of the robust economic recovery of Georgia and the region, a fact which opens stronger perspectives for connectivity and economic cooperation, as well as helping Georgia to move closer to Europe as a whole.

“The focal point of the cooperation is to draw Georgia closer to Europe,” French Ambassador to Georgia, Diego Colas, told us. “This is very important strategically, and we think a lot of people want it and that it is something that needs to happen. The question is how to make it happen. This latest visit is a good example how, because when businesses come, not only are they happy to come to make good business in Georgia, but also they bring the European style of doing business with them, the European style of competition, the European style of how to treat the consumer and customers when we’re talking about public services.

“If businesses don’t make it a reality, then [Georgia’s European future] might simply not happen, or will happen only virtually. We want Georgia to become a European country, and this visit carried a lot of promises of this becoming more realistic. This is what we’re working toward.”

“For a company, there are three reasons to invest in the country,” Germain said of Georgia. “First of all, macroeconomic stability. Second, the country’s attractiveness. And the third condition is to have a large pipeline of projects. Today, Georgia meets these three conditions. That’s why the potential of the country to attract new companies, new French companies, is significant.”

Monsieur Germain then assured the Georgian public that this business visit had given French companies an opportunity to have direct discussions on existing fields of cooperation and to explore new perspectives in such sectors as digitalization, tourism, low-carbon hydrogen and various applications of new technologies.