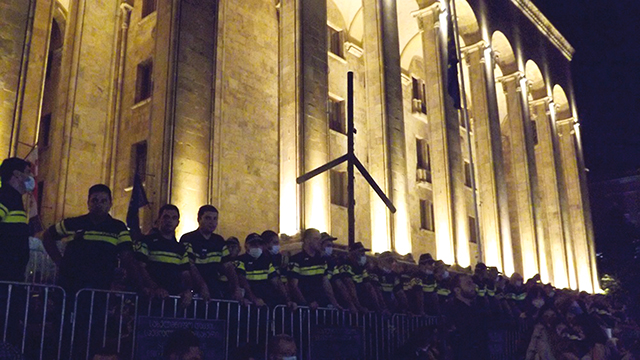 The unprecedented violence against media by homophobic groups and opponents of Tbilisi Pride on July 5 has turned out to be one of the most tragic and shameful facts in the modern history of Georgia. At the same time, it was clearly visible during these developments that the police forces mobilized at various locations weren’t enough to prevent the violent actions of right-wing groups and protect either media employees covering the events, or ordinary citizens. The Interior Ministry claimed that “all the available leverages and forces were used to ensure public order.” The numbers and results, however, prove the opposite.

Up to 53 media representatives were injured when covering the violent actions of aggressive groups on July 5. As part of the ongoing investigation into the protest rally against Tbilisi Pride, 21 people have been charged so far. At this stage, 36 people are recognized as victims in the case, including 30 journalists and cameramen.

Lekso Lashkarava’s Death
Sadly, the violence resulted in the loss of a young life when on July 11, TV Pirveli cameraman Lekso Lashkarava, who was severely beaten by opponents of Tbilisi Pride on July 5 while performing his duties and protecting a fellow journalist from their aggression, was found dead at his own home by his mother. Despite resistance from his family, his body was forcefully taken for forensic medical examination by police.

The next day, the Ministry of Internal Affairs presented the interim report of the chemical examination, based on which, drugs were said to have been found in the samples taken from his body.

However, this conclusion is not final,” the MIA said.

We will have to wait another month for the final conclusion from the forensic examination to be announced.

Five persons have been detained and charged so far for the physical and verbal abuse of the TV Pirveli camera crew. On July 13, Davit Kutaladze, one of the most aggressive radicals accused of assaulting Lekso Lashkarava and journalist Miranda Baghaturia on July 5, was sentenced to imprisonment as a measure of restraint. The detainee pleaded innocent.

The MIA says an investigation is underway to find and charge other perpetrators. 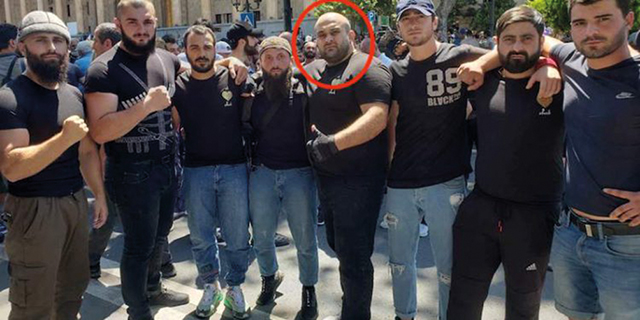 The Prime Minister’s View
Following Lekso Lashkarava’s death, a number of protest rallies organized by media representatives and NGOs have been held in front of Parliament. The next rally is scheduled to take place on Saturday, July 17, again in front of the parliament building.

Demonstrators demand the resignation of Prime Minister Irakli Garibashvili, who, with his anti-Pride statements, encouraged the hate groups; the resignation of his cabinet of ministers, and the arrest of all the perpetrators who attacked Lekso and other media employees.

“First of all, what does it mean when they say parade?” the PM asked on July 12. “I know only one parade [on Rustaveli]: our army parade. Other activities may be held to express a different opinion at any other location. Police offered the LGBT community another location.

“The police prevented everything. When 95% of our population demonstratively opposes the propaganda parade, we must all [listen to them and] obey. This is the opinion of our people and we, as a government elected by the people, must obey. Police arrested the perpetrators. We will hold all the perpetrators accountable,” Garibashvili said.

Despite the mass protests, not only the PM, but also a number of clergyman have refused to change their rhetoric. One now-infamous case this week was the outspoken head of the Vani-Baghdadi Diocese, Metropolitan Anthony (Bulukhia), who said that the journalists deserved to be beaten.

He verbally confronted media representatives and blamed them for Lashkarava’s death.

“You encourage debauchery! You abusers, you’re propagating – you are responsible for this death,” he told them.

Media Blackout
On July 14, four TV companies, TV Pirveli; Formula, Mtavari TV, and Caucasus, stopped broadcasting for 24 hours in protest at Lashkarava’s death and the attacks on media representatives on July 5. For 24 hours, the screens of all four TV stations showed only a black background with the names of the journalists and cameramen who were injured during the July 5 events.

“Prime Minister Irakli Garibashvili should resign! All offenders should be punished!” the TV companies demand.

The Opposition Try to Seize the Moment
Amid the difficult and tense situation in the country, there was confrontation also in Parliament in recent days. On July 12, opposition groups broke into the parliamentary session hall, occupied the Speaker’s seat, and displayed Georgian and EU flags, demanding the resignation of the Prime Minister.
Representatives of media organizations and civil society, including Vato Tsereteli and Vakho Sanaia, along with some opposition MPs, broke into the session hall, an act which was followed by physical and verbal confrontations. Media representatives noted they wanted to ask the MPs questions about Lashkarava’s death, however, they were refused entry to Parliament by security services. In the end, the security service of the Parliament forced the opposition lawmakers to leave the session hall, allowing majority MPs to hold an extraordinary sitting.

International Condemnation
Georgia’s foreign partners, among them the US Embassy, EU Ambassador Carl Hartzell, Senator Jim Risch, Congressman Adam Kinzinger, and NATO Secretary General’s Special Representative for the Caucasus and Central Asia James Appathurai, responded to these developments, expressing grief at the death of the media employee and condemning the overall violence. Sanctions have also been suggested by foreign partners as being considered.

On July 14, the US Department of State reminded Georgia’s leaders and law enforcement of their responsibility to protect all of those exercising their constitutional rights.

“We remind them of their responsibility to protect journalists exercising freedom of the press. And we encourage all Georgians, including Georgian officials, to publicly condemn this violence, which has no place in a democracy,” Ned Price, Department Spokesperson, said on Wednesday.

Asked if there are talks on imposing personal sanctions against those officials in the Georgian Government who were directly responsible for the violence on July 5, Ned Price said the US Department is closely following the situation.

“We have a number of tools to hold accountable those responsible in some way for human rights abuses, for violence around the world. Sanctions are indeed one of those tools. As you know, we don’t preview sanctions before we enact them. But we are following the situation very closely, and we are committed to seeing to it that those responsible for this are held accountable. When it comes to all political actors in Georgia, again, we urge them to very publicly condemn this violence. When it comes to the Georgian Government, I would reiterate our calls for a thorough investigation of this that leads to the perpetrators of this horrific crime being brought to justice,” Price stated.

Irakli Kobakhidze, Chairman of the Georgian Dream, announced on Thursday that the President of the European Council, Charles Michel, is to return to Georgia on July 19.