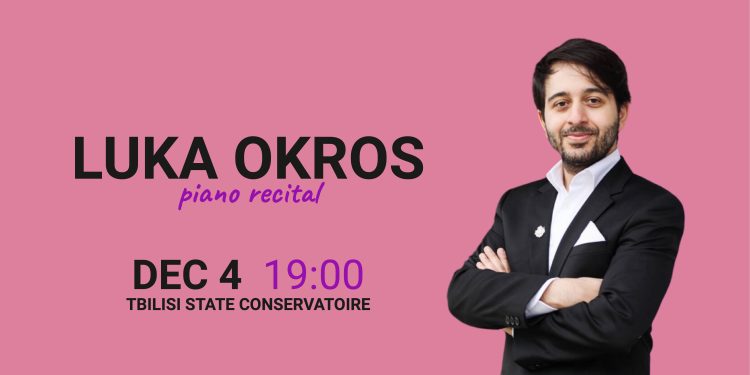 London-based Georgian concert pianist, Luka Okros, has established himself as one of the most outstanding pianists of his generation. The Guardian’s Observer has praised his performance as “An impressive display of virtuosic pianism”. Spanish newspaper Levante described him as “An Artist of the Sound.”

Born in 1991 (Tbilisi, Georgia), Luka started learning the piano at 4 and gave his first solo recital at age 5. He graduated from the Moscow Tchaikovsky State Conservatory (Prof. Sergei Dorensky) and the London Royal College of Music (Prof. Norma Fisher). In 2016 the Art Council of England granted him the Exceptional Talent Visa.

Luka has recorded two albums: “Schumann” was released on November 17, 2016, in Paris Salle Cortot, and “Chopin” was presented on July 16, 2019, in London Southbank Centre.
In addition to his career as a pianist, Luka works on creating an album of his compositions. One of the pieces was filmed and premiered by Het Concertgebouw’s Sessions. UK-based Master Music Publications publish scores of his works.
Since 2021 Luka has been appointed as an assistant artistic director at the Bechstein Hall – London’s new concert hall opening on Wigmore Street in 2023.