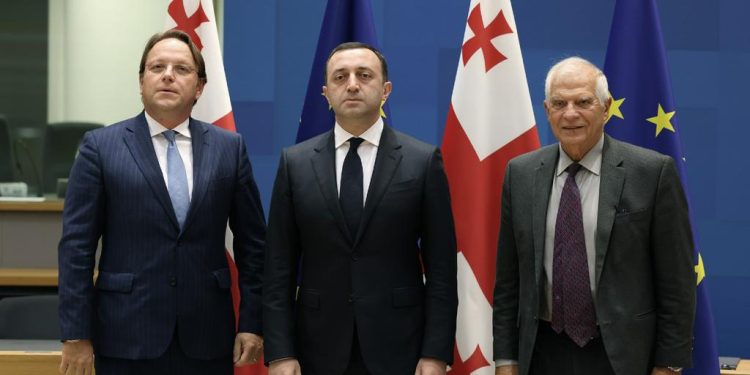 The European Union and Georgia united at the 7th meeting of the EU-Georgia Association Council in Brussels.

The Association Council highlighted the historic importance of the decision of the European Council of 23 June 2022 to recognize the European perspective to Georgia. The participants acknowledged that the European Council expressed readiness to grant candidate status once the priorities specified in the Commission’s opinion have been addressed.

“The future of Georgia and their citizens lies within the European Union,” the Council noted. “In this context, the EU welcomes that the work has started in the Georgian Parliament and encourages the ruling party to engage in an inclusive process with the participation of representatives from civil society and parliamentary opposition groups.”

The EU called on Georgia’s political forces to unite, work together and engage to address these priorities as a matter of priority. It then underlined that Georgia’s European path is merit-based, and they are ready to use all instruments to support it.

The Association Council welcomed the adoption of the revised EU-Georgia Association Agenda for the period 2021-2027. The document establishes a set of jointly agreed priorities towards further implementation of the Association Agreement, including the Deep and Comprehensive Free Trade Area (DCFTA).

The EU and Georgia reaffirmed their continued commitment to bringing tangible benefits to the lives of Georgian citizens across key areas of cooperation. The EU noted it will support Georgia in implementing the agreed objectives and priorities.

“The EU acknowledges that Georgia has carried out a number of challenging reforms and successfully approximated its legislation with the EU acquis in many sectors,” the Council noted. “We express, however, important concerns over the lack of substantial progress and negative developments in some key areas in 2021. We encourage Georgia to redouble its efforts to further consolidate democracy and reduce political polarization, to strengthen the rule of law, the independence, integrity and accountability of the judiciary and the fight against corruption.

“We also call upon Georgia to further enhance the respect of human rights and fundamental freedoms, including gender equality and ensure equal treatment between women and men, as well as persons belonging to minorities, regardless of religion or belief, ethnic or national origins, race, language, gender, sexual orientation, gender identity, ability or other ground in social, political and economic life and stressed the importance of media freedom and civil society engagement. Democracy, rule of law and human rights are essential priorities for Georgia to advance on its European path.”

The Association Council welcomed the progress on the preparations of the Human Rights Strategy of Georgia for 2022-2030. The EU recalled that the upcoming discussions in the Parliament create a good opportunity for an inclusive approach and due consultations with all key actors.

The Association Council recalled that upholding the highest standards of judicial independence, the right to a fair trial and the rule of law are essential commitments of Georgia under the EU-Georgia Association Agreement. The EU then urged Georgia to effectively ensure the independence, integrity and accountability of judicial and prosecutorial bodies, and adopt and implement an ambitious judicial reform strategy post-2021 based on a broad, inclusive and cross-party process, in line with European standards and the recommendations of the Venice Commission.

The EU underlined the need to ensure effective and efficient investigations of violence against media professionals in the context of the 5 July 2021 Tbilisi Pride March and strengthen preventive measures.

“We urge Georgia to bring all those responsible to justice, while noting steps taken so far. We welcome that the events related to Tbilisi pride in 2022 proceeded in a peaceful atmosphere,” they noted.

The EU underlined its firm support for Georgia’s sovereignty and territorial integrity within its internationally recognized borders. The Association Council reaffirmed its strong commitment to conflict resolution in Georgia through a comprehensive approach, including the EU policy of non-recognition and engagement, and with due attention to women, and the peace and security agenda. The Association Council stressed the critical importance of the Geneva International Discussions and Incident Prevention and Response Mechanisms (IPRMs) for addressing and resolving the challenges stemming from the conflict between Russia and Georgia in August 2008.

The EU and Georgia jointly deplore the continued implementation of so-called “treaties” on integration signed between the Russian Federation and the Georgian regions of Abkhazia and Tskhinvali region/South Ossetia, and other illegal activities of Russia in these regions, in violation of Georgia’s sovereignty and territorial integrity, including the military build-up and installation of barbed wire fences along the administrative boundary line. The Association Council expressed concerns about the dire human rights situation in the Georgian regions of Abkhazia and Tskhinvali region/South Ossetia, especially with regard to arbitrary detentions, restrictions to the right to freedom of movement, violation of property rights and education in the mother tongue, ethnic discrimination of Georgians, and impunity in the cases of deprivation of life of Georgian citizens. The Association Council stressed the need for unhindered access by international humanitarian and human rights mechanisms of the relevant international organizations, as well as the EU Monitoring Mission (EUMM), to both of these Georgian regions. The Association Council stressed the importance of support to people-to-people contacts and confidence building measures across the divides.

The Association Council recalled the European Court of Human Rights Judgement in the case concerning the armed conflict between Georgia and Russia in August 2008 and its consequences, which ruled that after 12 August 2008 the Russian Federation, exercising effective control over the Georgian regions of Abkhazia and Tskhinvali region/South Ossetia, violated several provisions of the European Convention of Human Rights.

The Association Council reiterated the obligation for the Russian Federation to fulfill the EU-mediated 12 August 2008 Ceasefire Agreement and reaffirmed its expectation that the Russian Federation should withdraw its military forces from Georgia’s territory and allow the establishment of international security mechanisms on the ground.  The Council stressed the obligation to ensure safe and dignified return of internally displaced persons and refugees to their homes.

The Association Council condemned in the strongest possible terms the unprovoked and unjustified Russian war of aggression against Ukraine and agreed to continue cooperating in the international format to hold Russia accountable. In return, Georgia recalled its commitment to continue doing its utmost to prevent sanctions circumvention. The EU and Georgia also committed to continue working closely on further strengthening the overall resilience of Georgia, in line with the objectives of EU-Georgia security cooperation.

The EU reconfirmed its support to Georgia in countering hybrid and cyber threats as well as its continued engagement in strategic communication and countering disinformation. In this context, the EU expressed concern over the increased anti-Western disinformation and rhetoric which risks damaging Georgia’s European path. The path which is supported by the government of Georgia and a vast majority of the Georgian people.

“We recognize Georgia as a key partner in the region and acknowledge the importance of EU-Georgia cooperation in the field of foreign and security policy,” EU reps noted. “The EU welcomes Georgia’s continued participation in civil and military crisis management operations under the Common Security and Defense Policy, namely in the EU military training mission in the Central African Republic and the EU Training Mission in Mali.

“We also welcome the successful recovery from the economic crisis caused by COVID-19, with GDP growth in Georgia at 10.4% in 2021, a positive trend that continued during the first months of 2022. The Association Council recalls the EU’s contribution to Georgia’s macroeconomic stability and overall resilience in 2020-2021,” the Council noted.

The Association Council underlined the importance and mutual interest in enhancing the connectivity between EU and Georgia in key areas such as transport, energy and digital sectors, recalling the potential of the agreed flagship initiatives under the Economic and Investment Plan for the Eastern Partnership. The Association Council reiterated Georgia’s key role as a partner for European energy security, and notably its transit role for Caspian hydrocarbon resources via the Southern Gas Corridor. In this context, the EU reaffirmed the importance of the Black Sea.

The EU welcomed Georgia’s actions to address the European Commission’s recommendations under the visa suspension mechanism and encouraged continued and sustained efforts, including to address the issue of unfounded asylum applications and to fight organized crime. The EU welcomed the implementation of the amendments to the Law of Georgia on “Rules for Georgian Citizens Exiting and Entering Georgia”.

The Association Council closed its statement by highlighting the importance of the Eastern Partnership as a regional format and underlined the need to adapt it to the evolving reality in the region.

The meeting was co-chaired by High Representative for Foreign Affairs and Security Policy, Josep Borrell, and Prime Minister of Georgia, Irakli Garibashvili.